photo: Aevangelist at Saint Vitus in 2014 (more by Caroline Harrison) 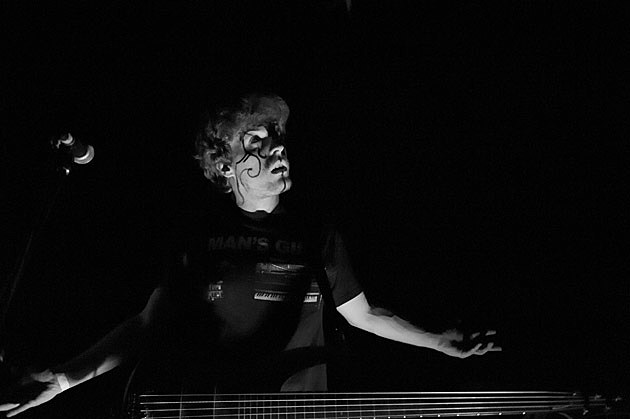 As always, there's a ton of metal happening right under everyone's nose, so now that it's October, let's round up some of the scary stuff. Over at Invisible Oranges, you can find a bunch of it, like this just-premiered new album by Aevangelist, Enthrall to the Void of Death, which is being released on 20 Buck Spin. Its an atmospheric, knotty, potentially overwhelming piece of death metal. It showcases enough reverb to choke a horse, and it is streaming below. Aevangelist don't have tour dates as of yet, but they are playing California Deathfest in Oakland on October 10 (we'll talk more about this later).

IO is also streaming the new album from Seattle's Serial Hawk, which is called Searching For Light. It's a groovy hunk of doom metal with a strong Om bent reflected in its bass playing that I would definitely recommend. Serial Hawk are currently on tour and will be playing NYC on October 11 at The Acheron, where they'll open for Jucifer along with It's Not Night: It's Space. Tickets for that show are on sale now. LP stream below.

This is but the tip of the iceberg on IO. Today editor Joseph Schafer published his editor's picks for September, which include a lengthy and fascinating consideration of the new Pope Francis jam, and are generally a great way to find under-the-radar metal (the new Dalla Nebbia LP, in particular, is an absolute gem). Along the lines of obscure gems, IO also recently published a Three part series on the history of South Korean heavy metal and hardcore punk, which is likewise fascinating stuff and is basically the definition of "worth a read."

IO writers also make a habit of appreciating classic albums when the occasion of an anniversary arises. On the main page alone, there are great re-assessments and celebrations of Judas Priest's now 25-year-old Painkiller, Obituary's equivalently-aged death metal masterpiece Nola, now a member of the two-decade club.

Speaking of Down, member Phil Anselmo's Housecore Horror festival is coming up. Mor than on a minute, but first some other exciting fall and winter metal festivals that are on the horizon. This weekend (October 3-4), Saint Vitus will play host to the 3rd annual NY Deathfest. The lineup features Ringworm, Gutalax, Disgorgement, Soils of Fate, Dead Infection, and many more. You can get tickets here.

For you west-coast deathfest enthusiasts, Oakland will be the site of this year's California Deathfest on October 9-11, which features not only Aevangelist but also a bunch of amazing bands like Noothgrush, Infest, Ghoul, Impaled, Autopsy, Lycus, Loss, Bolzer, and Immolation. Three-day passes and Saturday tickets (which, sadly, is Autopsy day) are sold out, but you can still get tickets for Friday and Sunday now.

November brings Martyrdoom to Saint Vitus. We've already discussed this, but consider this a reminder that the lineup is top-shelf (Necrophobic, Kommandant, Black Anvil, Blood Incantation, Bell Witch, etc.) and that tickets are on sale now.

And to finally bring things back to Anselmo, the Pantera/Down/Superjoint mastermind's own Housecore Horror Festival looms on the horizon. It takes place in San Antonio at The Aztec Theater On November 12-15, with a horrifyingly good lineup that has added King Diamond, Exodus and Claudio Simonetta's Goblin (who will be live-scoring Dawn of the Dead, which, yes please) to the already stacked roster of Agoraphobic Nosebleed, Eyehategod, Zombi, Crowbar, Corrosion of Conformity, Yob, Negative Approach, Nails, Ghoul, Cripple Bastards, and many more. On top of all this there is a "second stage" that appears in very small font on the flyer but will include excellent bands like Black Breath (whose Slaves Beyond Death also premiered at IO and is an early contender for metal album of the year), War Master, Disfigured, Aggravator and more. Tickets for the whole thing are on sale now.

There are also a whole bunch of great tours coming through NYC in the next month, most of which we've discussed already. KEN mode bring their tour with Child Bite behind their not-quite metal album Success to bear on NYC, playing the Acheron on October 9 (tickets). And later, Extortion and Full of Hell bring their tour to The Acheron on October 17 for a midnight show (tickets).

Over at Saint Vitus, tours will be welcomed from the likes of Goatsnake, whose new album is great and who will play NYC on October 15 with BIG/BRAVE and YDI (tickets). On October 21 the stacked tour of Kylesa, Inter Arma and Indian Handcrafts will weigh in (tickets). And then, on October 22, Bongzilla! (tickets).

Below, you can find streams for Aevangelist and Serial Hawk, as well as the full lineup for NY Deathfest and an updated lineup for Housecore.

Aevangelist - Enthrall to the Void of Bliss