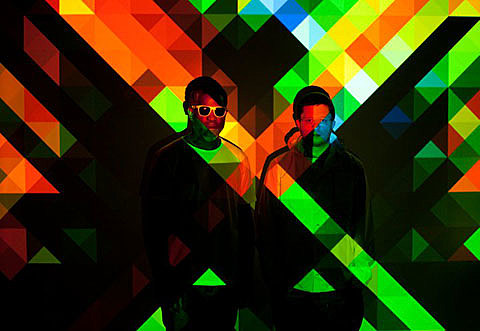 Africa Hitech, the moniker under which Mark Pritchard and Steve Spacek record together, released their debut full length 93 Million Miles this past May on Warp. Considering both members have been making forward-thinking electronic music since the '90s, it makes sense that when they come together, they're able to create a genuine formula of old school UK garage and dubstep. Unlike some of the other artists we've seen reach back to the genre's roots, like Mount Kimbie and Zomby, Africa Hitech's material on 93 Million Miles begs to be blasted at late-night parties and clubs, yet still without the superficial excess of guys like Skrillex and Bassnectar. Check out an album sampler and the video for "Out In The Streets" below, and pick up the album from the Warp webstore.

Africa Hitech just finished up a European tour and will play NYC on November 10 at Le Poisson Rouge with Sepalcure and Mux Mool, who plays with Pictureplane tonight (10/11) and also has CMJ shows coming up. Tickets for the LPR show are on sale now. More dates TBA.

Mark Pritchard is also one of the contributors to the Radiohead remix album, TKOL RMX 1234567, which you can stream HERE. The release party for the album is streaming NOW on Radiohead's website and Boiler Room's website. You can also stream Mark's take on "Bloom" below.

Video, streams, and all dates below...

--
Africa Hitech - "Out In The Streets" Official Video