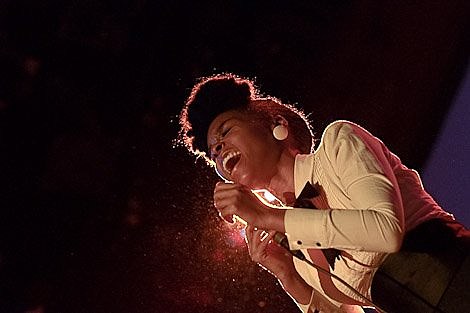 This summer Afro-Punk, BAMcinematek and Toyota will present the 5th annual Afro-Punk Festival, taking place July 3rd - July 8th, 2009 in the heart of Brooklyn, NY. The festival is the definitive destination for the global Afro-Punk community and audiences yearning to experience true AP culture!

Headliners at this year's fest include Pure Hell and Whole Wheat Bread on July 4th, Living Colour and Earl Greyhound on July 5th, and Saul Williams and Janelle Monae on July 6th.

Schedule and more info, below... 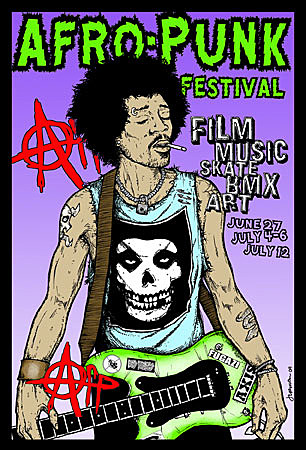 Free and open to the public, Afro-Punk Festival 2009 will spotlight some of the most exciting young artists and bands from the US and abroad, presenting live music and films every night throughout the festival, along with several other key events including:

Afro-Punk Festival film program is co-curated by BAMcinématek with Matthew Morgan and James Spooner, and the outdoor concerts and events are produced by Matthew Morgan. Outside BAM's Peter Jay Sharp Building, as well as at additional venues throughout Brooklyn, there will be free live musical performances, a skate park, and an Afro-Punk Block Party with DIY vendors.

27th June
PREMIERE: What's On Your Plate?
You've read Omnivore's Dilemma and Fast Food Nation and you try to buy local and organic produce at your neighborhood farmer's market. But do you really know how what you're eating ended up on your table? Through the eyes of two intelligent and inquisitive eleven-year-old girls from New York City, we follow the many paths, the conflicting economics, and the disparate decision makers who all play a part in what we eat. Ideal for families to watch together, the film presents a variety of perspectives on how food reaches our urban community and its associated challenges.

7th July
When We Were Kings
What's On Your Plate?
The Night James Brown Saved Boston

The Afro-Punk Skate Park will be erected in GGMC parking lot adjacent to BAM at Lafayette Avenue and Ashland Place. The skate park is open for three days of the festival. Staffed by BMX and pro skaters who will give demonstrations, the skate park will provide free instruction for youth of all ages along with boards, pads, and helmets. Rounding out the skate park will be a music stage hosting a high-energy series of DJ sets and musical performances, and various contests including:

6th July
Afro-Punk presents:
Urbanx - Battle for the Streets - Best Trick Contest
$5000 IN PRIZES including all expenses paid trip to the XGAMES Courtesy Of ESPN

Open Road leads skateboarding programs in schools, after school, in city-wide events, and builds parks that are open to the public for free skating. We create free skateboarding physical education programs in response to several interrelated needs and opportunities. Open Road offers skateboarding sessions for all ages. Our sessions are lead by male and female instructors trained by Billy Rohan. We offer beginner, intermediate and advanced levels. Beginner and Intermediate sessions begin with warm up stretches in a sequence developed by Billy. Safety/equipment care is covered in every session.

When Matthew Morgan and James Spooner joined forces in 2002, their focus was giving a voice to thousands of multi-cultural kids fiercely identifying with a lifestyle path-less-traveled. The result was 2003's Afro-Punk, the seminal cult classic film spotlighting Black Punks in America.

Since then Afro-Punk has become a cultural movement strongly reminiscent of the early days of Hip-Hop, and a touchstone for tens of thousands of Alternative urban kids across the nation (and the globe) who, tired of feeling like outsiders, have joined the Afro-Punk (AP) community.

Ground Zero for this movement is the annual Afro-Punk Music and Art Festival, launched in Brooklyn in 2005. Co-curated by Morgan and Spooner, the festival celebrates and unified the cultural cornerstones of Afro-Punk: music, film, skate, and most importantly, the fiercely independent and influential individuals that are the lifeblood of the AP community. Afro-punk has featured an intensely diverse group of artists over the years, including The Noisettes (London), The Dirtbombs (Detroit), Saul Williams (Los Angeles), and The Apes (Washington DC), as well as trend-spotting recent Grammy nominees Janelle Monae and Little Jackie at last year's festival. AP has also garnered praise from a wide range of media outlets ranging from Pitchfork, URB, Vibe, and Nylon to Variety, Entertainment Weekly, and The Los Angeles Times, and was the subject of an "Urban Eye" video feature by Melena Ryzik in the New York Times last year.