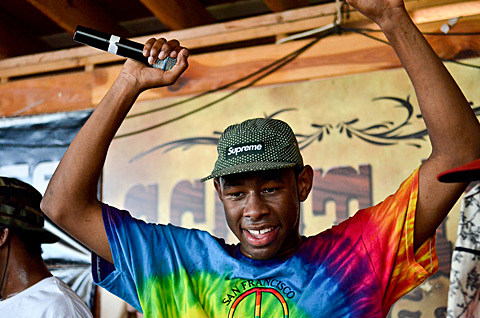 As anyone who listened to Hot 97 this morning knows (audio HERE and HERE), Odd Future are back in town as part of a short tour that coincides with Tyler the Creator's controversial new release "Goblin" via XL Recordings. The NYC show, which sold out very quickly the day it went on sale, is tonight at Highline Ballroom (late, at like midnight). And wherever the group now goes, news and hype follows. Yesterday in Boston they signed autrographs at Newbury Comics which reportedly caused a "riot" that resulted in one "injured cop" (that slipped and fell) (maybe on a banana peel). You can watch the video news story, and a video from the crowd, below...

Earlier this week the group played a "secret show" in LA which is where Tyler was "arrested", coincidentally on the day of the album release.