not at this Denny's, which is known more for stabbings... 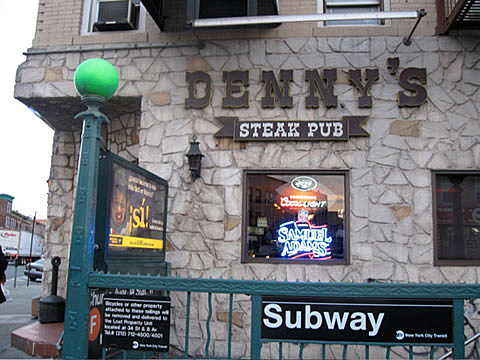 Flemington, NJ-based punk band Knuckle Sandwich had a tradition in the early 90's. They even sang about it. "After the show, we all go to Denny's!" went the chorus of the popular song by the popular local band known for their sing-along choruses and active mosh pits (not to mention for the huge, post-show business they brought to Denny's). The Denny's in question was located on the Somerville Circle in Somerville, NJ, as frontman Rich Vavrence points out in an earlier version of the song entitled, "Let's Go To Denny's" which someone uploaded to Soundcloud.

The Somverville Denny's is long gone, but the tradition of eating at the 24 hour chain diner after a show lives on, knuckle sandwiches included. TMZ confirmed that this week. While DMX was allegedly robbing someone at a gas station after a show in NJ, Marilyn Manson was experiencing his own NJ-like, post-show action up in Canada:

Goth rocker Marilyn Manson got more than two pancakes, two eggs, two pieces of bacon and two sausage links during a trip to Denny's this past weekend ... he allegedly got clocked in the face!

According to our sources, Manson had a concert in Alberta, Canada on Saturday night and hit up a local Denny's around 2 AM. We're told Manson got into an argument with a group at another table, and at some point allegedly called a guy's gf a bitch.

The guy was pissed, and we're told he responded by punching Manson in the face.

Police confirm there was a disturbance at Denny's that night, but no charges were filed and the case is closed.

We've reached out to Manson, and he's going on the attack for what he calls a "sucker punch." [TMZ]

Hopefully the dark lord's face isn't too bruised up. He needs to look pretty for his upcoming tour with Smashing Pumpkins (not that we'd notice under the makeup).

And speaking of violence at Denny's, Brooklyn had their own taste this week, though it wasn't at a Denny's with a yellow sign. South Brooklynites may be familiar with the other Denny's, a pub located near the Church Ave F stop in Kensington (pictured above, they don't actually serve steak anymore). That's where a man was stabbed on the sidewalk in the middle of the afternoon on Monday. No, it didn't happen inside. That was the stabbing that happened at the same spot just a month earlier.

And speaking of 'goth rockers', KMDFM (who have shared a band member with Manson), also just announced a tour.