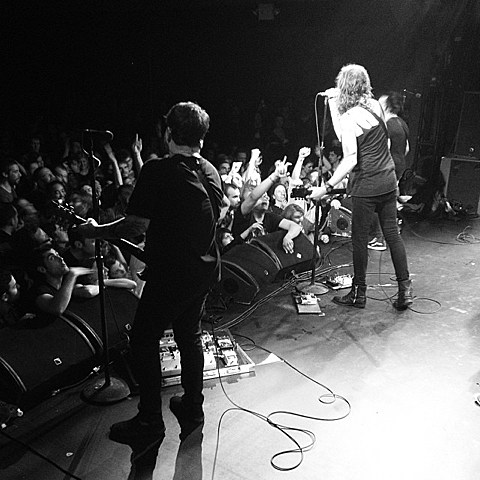 Against Me! are just a week away from their release of their anticipated new album, Transgender Dysphoria Blues, their first since singer Laura Jane Grace (formerly Tom Gabel) came out as transgender, and the first on their own Total Treble Music label after two major label releases. The melodic, anthemic punk that made their much of their earlier material so vital is intact here, and the heartbreaking reality that Laura delivers in her lyrics makes for some of their most powerful moments yet. You can now listen to the album in full ahead of its release date at NPR.

Late last week, Against Me! brought their tour with The Sidekicks and The Shondes to NYC for a show at Music Hall of Williamsburg (moved from Rough Trade) on Thursday (1/9). Their 20+ song set included half of the new record, plus a ton of stuff from throughout their back catalog including old favorites like "Sink, Florida, Sink" and "We Laugh at Danger (And Break All the Rules)." The NY Times caught the show and wrote:

Laura Jane Grace, the frontwoman of the punk band Against Me!, introduced all the new songs by name on Thursday night at the Music Hall of Williamsburg, as the singer of a band with a new album generally does, and should do.

"This one's called 'True Trans Souuuuullll Rebel,' " she said. It's a vicious and beautiful number from the band's new album, "Transgender Dysphoria Blues," and appealingly peppy, too. From the opening verse:

Watch a video of the band playing the new album's "Black Me Out" at the MHOW show, along with their setlist, below...

Encore:
Two Coffins
Rapid Decompression
We Laugh at Danger (And Break All the Rules)