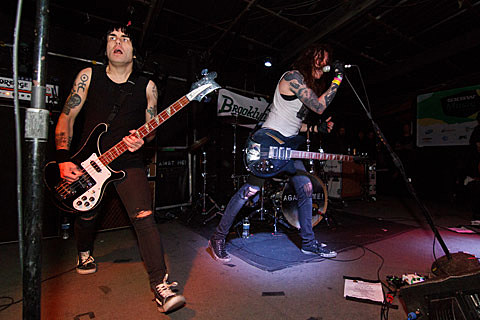 Against Me! are spending almost no time off the road this year. They've already done a ton of touring (including SXSW, where they played our showcase), and with a previously-announced schedule that's busy through late June, the band have begun revealing dates for yet another leg.

For this one, they'll be taking out Weezer/Thin Lizzy lover Tony Molina and poppy Seattle-via-Brooklyn punks BIg Eyes. That should make for some great triple bills, including the one that will happen in NYC on May 3 at Webster Hall. Tickets for that show are currently on AmEx presale, and they go on sale to the general public on Friday (3/28) at noon.

Most dates on the Against Me!/Tony Molina/Big Eyes tour are still TBA. UPDATE: All dates have been announced, and are listed (including AM!'s Punk Rock Bowling appearance), with streams of all three bands, below...

Tony Molina - Don't Come Back from Renny McCauley on Vimeo.