Against Me! at Webster Hall in May (more by Amanda Hatfield) 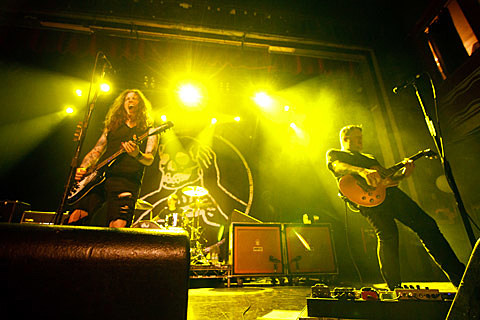 Against Me! have been loving the road this year, logging multiple tours that have come through NYC on two occasions. They've now announced another run, and though this one doesn't hit NYC, it will be nearby for shows in Amityville on July 26 at Revolution and Hartfort, CT on July 29 at Webster Theater (not to be confused with NYC's Webster Hall). Like their last two tours, Against Me! have got some pretty interesting openers lined up for this one: Philly shoegazers Creepoid and singer/songwriter Jenny Owen Youngs, who Noisey just interviewed about her first year as an openly gay musician:

For many years, I was convinced that coming out could only have a negative impact on my career. I was afraid that my musical self would be overshadowed by my gay self. But so far, my experience has shown me that sharing another side of my life helps me to connect more deeply with people. I have gained a clearer understanding of myself, which I think is reflected in both my writing and my performances. A certain type of self-consciousness seems to have melted away from me, and it turns out that when I'm not spending a great deal of my time second-guessing myself and worrying about whether I'm doing or saying something that might allow someone to infer that I'm gay, I have an awful lot more time and energy to do things that matter to me (like write songs).

Tickets for the Amityville and Hartford shows go on sale Friday (6/13) at noon and 10 AM, respectively. All dates are listed below.

Meanwhile you can also catch Creepoid in NYC this weekend at Exploding In Sound's Northside showcase. They're also on multiple stops of the just-announced Balance & Composure / Seahaven tour, including the NYC show happening October 1 at Irving Plaza. Tickets for that show go on sale Friday (6/13) at 10 AM.

All Creepoid dates are listed, as well as all Against Me! dates, below...