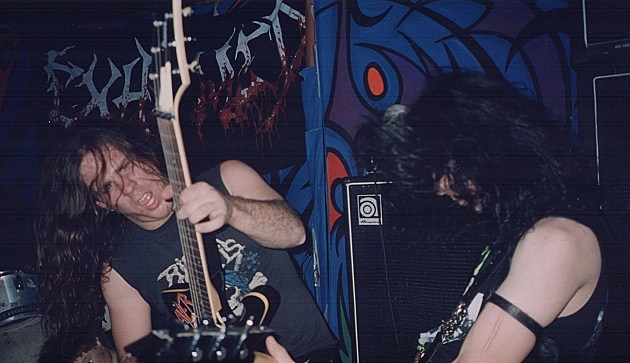 We recently wrapped up a three-part series at Invisible Oranges titled "The Story of Lucifer's Hammer" by guest contributor Avinash Mittur. The piece tackles the resurgence of metal in California's Bay Area during the late '90s/early '00s through recollections of those responsible for the Lucifer's Hammer metal club. Avinash got a hold of some of the scene's biggest names, including Mike Scalzi (Slough Feg, Hammers of Misfortune), Ross Sewage (Impaled, Ghoul, Exhumed, Ludicra), John Cobbett (Hammers of Misfortune, Slough Feg, Ludicra, Vhöl), Aesop Dekker (Ludicra, Agalloch, Vhöl, Worm Ouroboros), and Leon del Muerte (Impaled, Exhumed, Phobia, Intronaut, Nausea), among others. As you'd expect given those participants, the anecdotes are on another level. A few choice selections.

"We were the only Bay Area band in the early '90s that played total old-school heavy metal. Around here, nobody wanted anything to do with New Wave of British Heavy Metal," Scalzi says. "No way, forget it. In '95, I remember Iron Maiden playing places that we would play. Seriously. Can you imagine? Iron Maiden playing a place smaller than Slim's? It was insane!"

"That was an amazing, amazing night," says Cobbett. "What we're talking about is a really shitty punk rock dive bar with Mayhem and people came from miles around to see that one, man. I had bands calling me on the phone and getting all fuckin' Varg Vikernes on me saying, 'I will kill to play with Mayhem. I will kill to get on that show.'" Cobbett chuckles at the ridiculousness of the situation. "I had to go the butcher and get skinned cow heads and bring them to the show. It was amazing, man."

"There was a really diehard core of regulars. It's like that story about the Sex Pistols show that eight people went to and every one of them formed an awesome band," Dekker says. "It was like that, people were meeting at the shows, bands would then be popping and then they'd be like, 'We want to play.' A lot of bands formed from people meeting at Lucifer's Hammer and then they'd play their first show at Lucifer's Hammer. It was sort of like sowing seeds in a sense."

It's a great little read and it provides some background on these ultra-active metal participates, one of whom will be swinging by New York City shortly. Aesop Dekker, who is drumming for Agalloch and had a great chat with Kim Kelly back in 2010, will be playing Irving Plaza on June 30 with Jex Thoth for their IO sponsored engagement. Tickets are still available.

A full video of the Mayhem set Cobbett mentioned appears below.