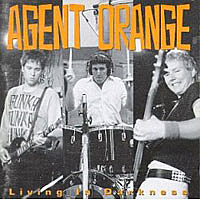 "Agent Orange is a punk rock band from Fullerton, California. They were a surf-punk band from the 1980s and first gained attention with their song Bloodstains which they wrote for a local Orange County compilation album........................Agent Orange has had an enormous influence on the punk and hardcore scene, even though band members stated on Living in Darkness that "We don't feel a part of that scene at all." Agent Orange was one of the first bands to pioneer what would later be known as the skate-punk or skate-core scene. They developed a following in Fullerton along with The Adolescents. The band is still together today with few member changes. Their most recent album was in 2003 with Sonic Snake Session." [Wikipedia]

It's not that rare to see Agent Orange play - in fact they just played Continental last summer, but nonetheless they're an original (well one member is anyway) and they're playing CBGB one week before it closes for good on September 30th (well before it moves to Vegas).