Agnostic Front at Power of the Riff, 2012 (more by Greg Cristman) 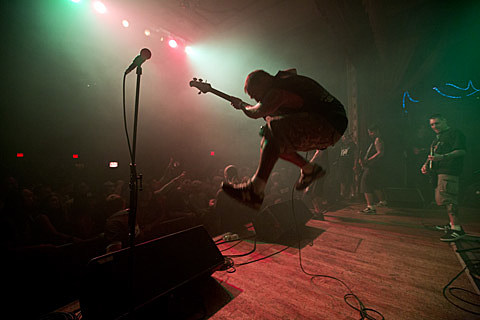 After saving This is Hardcore Fest by filling in, Agnostic Front sit atop the first round of announced bands at East Coast Tsunami Fest 2014. The initial lineup posted on Stereokiller not only includes the NYHCers, but bands such as Ignite, Sick of it All, Cro-Mags, and. . . Obituary. Makes sense when you think about it. Anyway, the fest takes place on September 26 through September 28 at Reverb in Reading, Pennsylvania. Ticket information will be announced soon. Full lineup below.

Agnostic Front and many other hardcore bands, including Bad Brains, Gorilla Biscuits, Bold, Born Against, Judge, Misfits, Murphy's Law, Quicksand, Rorschach, Sheer Terror, Sick of It All, Youth of Today and still more, have also been interviewed for the new book NYHC: New York Hardcore 1980-1990 that's coming out on Bazillion Points in November. The Tony Rettman-authored oral history takes on the formative decade and apparently goes pretty deep. According to Bazillion:

Tony Rettman's ambitious oral history captures ten years of struggle, including the scene's regional rivalries with D.C. and Boston, the birth of moshing, the clash and coming to terms of hardcore and heavy metal, the straightedge movement, and the unlikely influence of Krishna consciousness.

That thing must be longer than John Joseph's resume.

Full East Coast Tsunami Fest lineup, along with classic Agnostic Front (plus Sick of it All and Gorilla Biscuits) live footage, below...