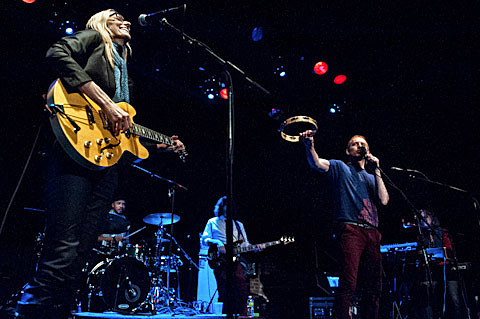 When it was announced last year that Ted Leo would be touring with Aimee Mann, despite the fact that the two certainly have some things in common, it was a bit of an odd pairing, considering Aimee's long history as a generally above-the-radar artist and Ted's inherent underground-ness. (Not to mention their styles of music.) But the tour worked out great and saw Ted and Aimee really getting along on the road and collaborating on stage too. Well, now they're taking that a step further and have announced a new collaborative project called #BOTH. For the new band, they'll "be showcasing songs they have written together as well performing some of their own original material." They haven't announced an album or a full tour yet, but they have a few shows scheduled in California, which are listed below.

Though there aren't any East Coast dates scheduled at the moment, Aimee previously announced her own East Coast run which includes NYC-area shows on April 19 at The Paramount in Huntington and April 20 at Webster Hall. Tickets for those shows are still available. Ted lives in the area so here's to hoping he at least makes an appearance!