Aimee, Liz and Ted in LA (photo via Trent Vanegas) 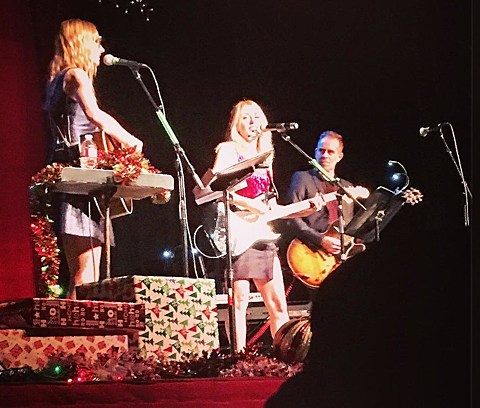 We already mentioned Aimee Mann and Ted Leo would be doing their annual holiday shows with past collaborator Jonathan Coulton and more special guests, and since we last spoke Liz Phair and John Roderick were added to all dates too. It's Liz's first tour since 2011.

The tour began in California earlier this month. Here's a review from SF Weekly of one of the San Francisco shows:

Mann also knows how to sing a Christmas song. Her holiday show has become a tradition in both her hometown of Los Angeles and elsewhere when she embarks on a small tour in the early days of December to spread her uniquely somber, but entirely beautiful, brand of winter cheer. Classics like "Winter Wonderland" and "I'll Be Home for Christmas" got a much needed makeover in the hands of Mann and Leo, scrubbed of their Bing Crosby sheen and rendered raw and potent. But, it was the original compositions that stole the show.

Guest Liz Phair introduced her song "Ho Ho Ho" by explaining, "This is my one true Christmas song, but it's also depressing, which is why they let me on the tour." Phair also enlisted Mann and Leo in a performance of her track "Supernova," but it was "Why Can't I Wreath" - a Christmas revision of her own "Why Can't I" - that turned into one of the night's most memorable moments.

Their two NYC shows happen this week: Thursday (12/10) at Town Hall and Saturday (12/12) at Music Hall of Williamsburg. Tickets for both are still available.

Aimee and Ted also just put out a stream of their new holiday single "You're A Gift," which will officially be out on December 18. Listen to that, watch a few clips of Aimee, Liz and Ted playing at the California shows, and check out the list of their remaining tour dates, below...