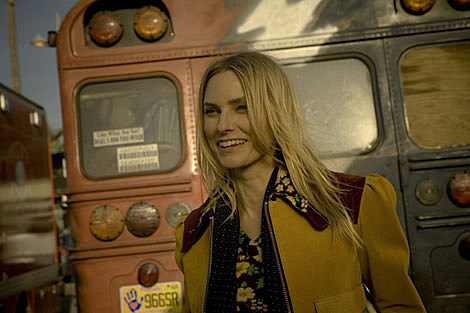 Aimee Mann is going on tour this July across the Northeast US. Those dates include three nights at NYC's City Winery, on July 13th, 14th, and 15th. The venue has announced that tickets for those shows will go on sale today (Friday, April 3rd) at 10am (whether that's a member presale or general sale is unclear).

She's also playing the Paramount Center for the Arts in Peekskill, NY, a town that's a little over an hour outside NYC. There is an Aimee Mann fanclub presale for those tickets that also starts today (Friday, April 3rd) at 10am. Tickets go on sale to the general public Tuesday, April 14th at noon.

Aimee recently taped a set for PBS's "Live from the Artist Den" series, to broadcast sometime in April. She also helped out at WMFU's pledge drive in March, both answering phones and performing (videos below). In December, she played her annual holiday show at Nokia Theatre in Times Square.

Aimee Mann and Paul F. Tompkins Duet on The Best Show on WFMU

Aimee Mann on The Best Show on WFMU