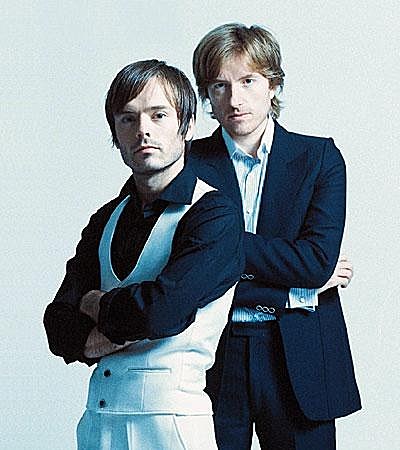 Following the October release of their fifth studio album Love 2, French electronic pop duo AIR (Nicolas Godin and JB Dunckel) return to the U.S. for their first live shows in three years....AIR is preparing for the first of several U.S. trips, the first of which will be a traditional tour showcasing the breadth of their catalog and re-interpretations of new songs from the "Love 2" album. For the first time on these dates, the band will be performing their live show as an intimate three-piece with Godin and Dunckel taking on full instrumental and vocal duties. This follows a successful short tour of China and the Far East in late 2008, where they experimented with a core of three musicians and the current live set took shape.

For the North American dates, AIR will be joined by British drummer/percussionist Alex Thomas (Bat For Lashes, Badly Drawn Boy) and guest opening act will be AM, a revered multi-instrumentalist from Los Angeles with a flare for distilling global music influences into his own unique and infectious pop confections.

Air's North American tour kicks off in Miami on March 13th and hits NYC on Friday, March 19th, when the band plays Terminal 5. Tickets go on sale Friday at noon. There's a fanclub pre-sale Thursday at 10am for those on Air's mailing list (which you can sign up for on their site).

All tour dates and videos for Love 2's first two singles are below...

Filed Under: Air, AM
Categories: Music News, tour dates
Comments
Leave A Comment
Back To Top