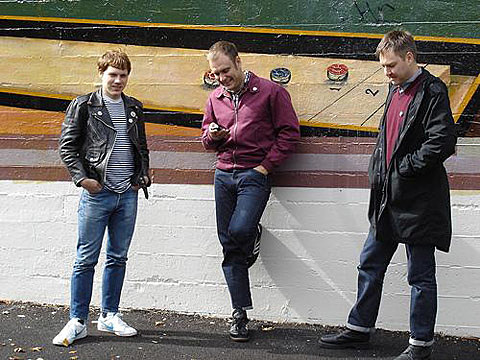 San Francisco bands Airfix Kits and Young Offenders are swinging through NYC to play a pair of shows this weekend, hitting Union Pool tonight (11/4, not at Bruar Falls anymore, due to its recent closing) for a show with Freshkills & Only The Messengers and another show at Acheron on Saturday (11/5) with Rival Mob, Give and Hoax. The shows are the band's only East Coast appearances. Between both dates you'll be able to see bands that are both of the hardcore persuation (Acheron) and something that leans more punk/post-punk (Union Pool). More show details are below.

Both Hoax and Give are preparing releases with Painkiller Records, though details on both are still to be announced. In the meantime, check out some live video and song streams below, including a recent video for Freshkills' "The Wolves That Raised You" and some unreleased tracks...

--
Freshkills "The Wolves That Raised You"

The Rival Mob - Hardcore for Hardcore