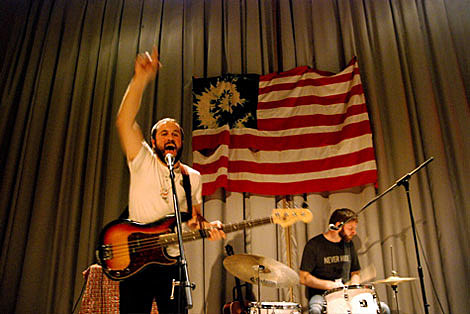 Akron/Family will continue to tour behind their new disc, Set 'Em Wild, Set Em Free, into the fall, with tour dates supported by "Wooden" Wand, Jeffery Lewis & The Junkyard and Slaraffenland. On those shows, "the Slaraffenland horns will join the band on stage each night (a la The Dodos [who have shows coming up] or Megafaun before them) to form the Akron/Family big band."

NYCers can next catch Akron/Family at either All Points West or All Tomorrow's Parties. Slaraffenland are playing a NYC show on September 22nd at a venue that is still TBA.

Akron/Family is releasing a series of 7" singles through Dead Oceans. Those records will be available mainly on tour, and contain 'Em Wild a-sides and exclusive, unreleased b-sides. The first of those, featuring "Everyone is Guilty," is out now; the second in the series, "River," comes out in September. Details on those singles below.

Slaraffenland's new album, We're on Your Side, will be out September 15th on Hometapes. "Meet and Greet," that record's first single, is posted above. In addition to their dates with Akron/Family, the Danish group has a TBA NYC show penciled in for Tuesday, September 22nd. They also recently collaborated with filmmaker Vincent Moon (of The Take Away Shows) for a video filmed in their native Copenhagen.

Moon also recently taped Akron/Family's March 29th Union Pool show. That video, with all tour dates, album info, and some background on Slaraffenland, is below...

Conceived in 2002, Slaraffenland (translated: the land of milk and honey) is the work and art of Christian Taagehøj, Mike Taagehøj, Bjørn Heebøll, Niklas Antonson, and Jeppe Skjold. These five members (a few of them childhood friends, and Mike and Christian are near-identical twins) were united by both a love of music and a scholastic interest in its techniques. Among them are three fathers, teachers, and players knit into the music scene in sonically-vibrant Denmark. Slaraffenland singlehandedly curated and hosted an event at SXSW 2009 called "Danish Dynamite," an outdoor party featuring the likes of Efterklang, Murder, and the Choir of Young Believers. They returned home to hammers and saws, breaking ground on their own rehab project of turning an old factory building into a studio. The racket was recently interrupted by the news that the Danish Arts Council awarded five Danish bands generous grants to continue their work. Among them: Slaraffenland.