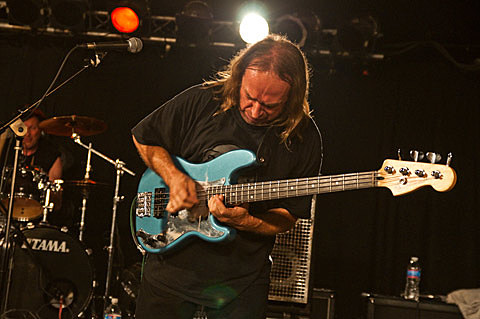 Isreal Lawrence of ex-Man Is The Bastard fame is in contact with Akron/Family regarding the logo issue and is writing about it publicly in a MiTB open group on Facebook. Though Akron/Family has thus far chose to not make a public statement, in a note to Lawrence, A/F bassist Miles admits that his band "clearly 'stole'" the logo as well as the Crass circle, but that it was a tribute (which Lawrence admits did occur to him). Lawrence seems to understand, but suggests Akron/Family stop avoiding the issue publicly. Read it all below.

In possibly more important news, The Bastard Noise have shared a split with Actuary, one of a few Pro-Noise releases currently available at their bandcamp. Stream that below and download them for free at their site.

i'm currently in communication with the bassist of Akron/Family over this whole logo thing. i'm gonna repost the messages he just sent to me: "My name is miles, I'm the member of Akron/Family who decided to lift the MITB skull and I take responsibility for it. I saw MITB at 16 years old and it changed how I heard and played music and made me want to play bass (which I have ever since) it was an honest tribute. As you can see I/we clearly "stole" the crass circle as well: I didn't contact anyone to ask permission. We weren't trying to "steal" your logo. And we're never planning on long term use. When i used to make zines or flyers or shirts for my first band it everyone used everything ones. Influences were clear. Anyway I would be happy to talk about this In a non public format to come to an understanding and apologize publicly. To you and all others involved. Just in interest of actually repairing the situation. It was an innocent gesture and honestly meant as a tribute and I stand by it artistically. The economy of images is clearly not innocent in culture and Im not oblivious to that either. I am happy to address all of this with you, and come to an understanding of how to deal with it. Like i said - the use was tied to the inspiration I felt when making a particular aspect of our music. It's never been about Trying to use the skull forever. It's an honest artistic nod to music / imagery I grew up with ."

Isreal Lawrence followed up with:

my response: "Well im certainly happy to hear that it was coming from that direction. Look I get it, I really do. I'm totally into reference and homage, I love the underground nods. I've been thinking about this all morning and I'm all for free use and everything, and I tend to be of the opinion that coyright is bullshit...but you got understand that this just hit all of us out of the blue. With no warning or communication you have something that is very personal to all of us plastered all over several items you have for sale. I even stood back for a few minutes and wondered to myself: "they couldn't really just co-opt something so recognizable and expect this to pass could they? This has to be a nod, right?"

But honestly man it seemed so out of context, and MITB is/was a very niche thing...I'm far from convinced that the bulk of your audience would even pick up on it. So yeah, in light of that I came to the conclusion that you were pulling a fast one.
Regardless, it aint just me you have to convince. Wood (Bastard Noise) is already on a rampage and the shit has hit Brooklyn Vegan for starters.

strange footnote: ole Miles is pretty insistent on speaking in a non public forum, and with them disabling comments on their collective net pages i can't come to any other conclusion than they are already hunkering down in the bunker in anticipation of some imagined legal action

Isreal Lawrence then posted another response from Miles:

Thanks for writing. I totally understand that this is very personal to you and that this is totally out of the blue to you. I appreciate as well that your coming to find it on items for sale must've felt confusing and shitty. and I'm really sorry about that.

I appreciate your position - I'm completely for free use. We encourage the taping and free distribution of our live shows. The first use of this was for the digital "artwork" we used when leaking fucked up / blown out versions of our record onto the internet as an art prank. have to be really honest that I didn't know that bastard noise was still in operation until after we'd already used it, and at that point I should have made contact, but it was as I said meant to be an homage and an homage that I wouldn't be upset about if someone made to us.

Anyway I can tell that Eric Wood is really upset about this.. I hope we can figure something out. I'm honestly most bummed about pissing off folks that really inspired me. Do you have any advice on how to proceed?

Thank you very much again for writing and for the music in the first place.

I think the conflict arose Miles in that the reference was pretty vague. It may have seemed pretty obvious to you...but I was initially giving you all the benefit of the doubt in the first minutes I perused your website, and it seemed so out-of-context as I mentioned that I really did come to the conclusion that you just swiped the imagery. Many folks have made reference to our artwork in the past and I personally think its very flattering...but those references were extremely obvious, arose in a circle of people that would easily get the nod, and not used on a bunch of merch posted in an online store.

Unfortunately Wood has quite a temper, and has a 'shoot first, ask questions later' sort of personality. I tend to be a little more level-headed. I think the man needs to work on controlling his mouth, but I don't blame him for being irritated...I was highly irritated. So, ok...we are now in a spot where you and I can agree it was just a misunderstanding. I think a public statement on the outlets available to you would go a long way in calming the situation. Keeping mum on the subject, disabling comments on your Facebook or whatever just makes it look like you are ducking the issue. As far as I'm concerned this isn't about ownership or something stupid like legal action...it was simply a matter of respect.

I'm feeling that your words are authentic, in my mind if you just tell everyone where you were coming from it's issue over.

UPDATE: Miles of Akron/Family has responded.

Miles here, and i just want to say clearly that the use of the man is the bastard / bastard noise skull was meant to be a reverent homage to music / art that profound impact on me. And though it's likely that most of the people who listen to our music likely won't know the origin of the image, it's use was far away from "theft" to me. i'm very disheartened that this has been interpreted as a lack of respect. again, it's quite the contrary.

I saw Man is the Bastard in 1995 at the velvet elvis in seattle. having been writing songs and singing in a fairly straight ahead hardcore band in seattle
at the time and being 16 - i was not prepared. I had never seen aggressive music played with such disregard for the bounds of genre. the reinvention of bass playing happening on the spot, the references to jazz drumming { (tony williams) strifetime }, the wall of synth brutality, even how everyone looked so different (not all in one "punk" uniform) totally blew my mind. When i approached the bass a year or so later it was with that inspiration that i started to try to define my own style. I could go on and on about it, but i feel like this says what i mean. I'm not very interested in responding individually to all of the comments here, and to be honest, when i disengage a little from my own temper, i am inspired anew by the passionate and heated responses to this situation, so thanks for that!