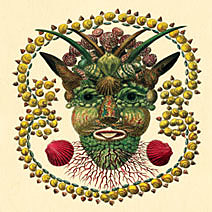 In October of 2007, it was announced that original member, Ryan Vanderhoof, departed the group "amicably sometime between the completion of (2007 release) Love Is Simple and the start of the band's U.S. tour" according to Akron/Family's publicist. The reasoning behind his departure was that "he went to live in a Buddhist Dharma center in the Midwest."

Lots of chances to see Akron/Family (minus Ryan) coming up - tonight they're at Wesleyan College, tomorrow at Maxwell's, and Thursday they play a cheap show at NYU...

Friday they're in Pittsburgh, Saturday back in NJ and then next week they'll play at least three shows at SXSW before heading to the West Coast for Coachella in April. They're also the first band I know of to announce that they'll be playing a free show at Castle Clinton in NYC this summer. All dates below...