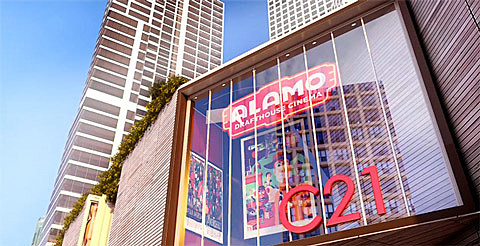 Austin cinema institution Alamo Drafthouse has begun an all-out assault on NYC with THREE new theaters all slated to open in the next three years. Here's your preview of coming attractions:

Alamo Drafthouse Cinema is pleased to unveil its plans for a third location in New York: Alamo Drafthouse City Point. The seven-screen theater will be located at City Point, a new 1.8 million square foot mixed-use project that is being developed by Acadia Realty Trust and Washington Square Partners.

"I am extremely excited about the major development in downtown Brooklyn and proud to be a part of it," said Alamo Drafthouse Founder and CEO Tim League. "Although more than two years on the horizon, I can tell you that the City Point Brooklyn Alamo will be our best theater yet."

The venue will feature seven screens of new releases, repertory programming and the Alamo's unique signature programming in both 35mm and digital formats. Like all Alamo Drafthouse theaters, Alamo Drafthouse City Point will provide food and drink service to your seat and will uphold its famously strict no-talking policy. The new theater is currently scheduled to open in 2015.

The City Point location will be in downtown Brooklyn at Fulton Street Mall, and will open after planned Upper West Side and Yonkers locations (both of which are said to be due in 2013). For more on the Drafthouse's famous no talking/texting policy, check out the video below.