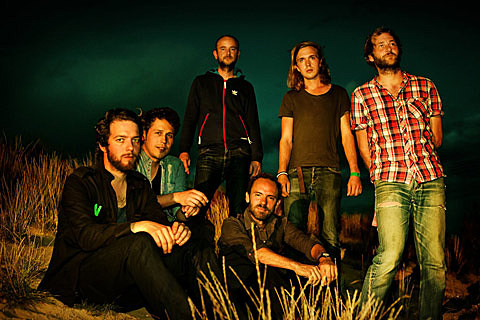 Amsterdam's Alamo Race Track are visiting for CMJ this week...but before that madness starts they're playing a free show tonight at Mercury Lounge. It's early, doors at 6:30 and the band on shortly after that (WATERS play the late show at the same venue). As for actual CMJ showcases, Alamo Race Track play two shows at The Delancey: Wednesday (October 19) at 8PM and then Thursday afternoon at 2PM as part of The Dutch Impact party.

Formed about ten years ago, Alamo Race Track just released their third long-player, Unicorn Loves Deer, which  is thick with horns, strings and five-part harmonies (which they replicate live). It's not that dissimilar to the folk pop of Loney Dear. You can download "Apples" at the top of this post and stream the entire album at the bottom of this post.

The Dutch Impact Party on Thursday afternoon has two more bands from The Netherlands: the rocking, calamitous De Staat (3PM) and even harder-rocking duo Death Letters (4PM). Like most day parties, it's free.

Click through for Alamo Race Track album stream, plus videos from all three Dutch bands.