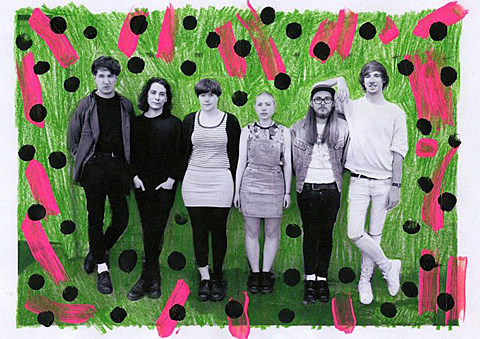 Punky indiepop band Joanna Gruesome released their second album, Peanut Butter, earlier this year. They're about to tour as well, but with one major lineup change: singer Alanna McArdle has decided to leave the band. In a post to their Facebook, she writes:

Lately, my mental health problems have become a lot worse and I've gone through a pretty shitty time. I've realised I need to actually take some time out to focus on some kind of 'recovery', so I won't be singing in Joanna Gruesome anymore. I hate to sound cheesy but the time I had in jgro was life-changing. I made friends with so many amazing people, had the chance to play with some of my favourite bands, went to places I'd never been before (metaphysically and geographically) and pissed off a lot of men in the process. I am really proud of everything I've done with the band, especially Peanut Butter, and I think we've made some really great records. Thanks to everyone who ever put up with me on tour, and anyone who stopped any assholes from hurting other people at our shows xo

lan joined the band after seeing us play somewhere in london years ago after our previous singer moved away, and since then has been the most amazing vocalist/person/band member/gruesome we could have ever asked for. just on like a musical level, it's been incredible writin songs and melodies for someone with such a powerful voice to sing, and her amazin lyrics have always totally improved the aggressive sections of our music. but also in every other way, it's been so so cool to be in a band with someone we've became such great friends with, someone who's been totally unafraid to hone in on horrible jerks and someone who's made negotiating the bullshit of music industry types fun and inspiring. it's taught us loads, we've had some of the best times and we totally support her decision. she's been an amazing person to be in a band with. we will miss her greatly.

so we have a new lineup. we're really pleased to be joined by two amazin and inspirin women, KATE (of feminist/queer punks pennycress) on melodic vocals/shouting/screaming and ROXY (of two white cranes, grubs, formerly trust fund and misandrist power trio TOWEL) on melodic vocals/keyboard. we met them both in an occult bookshop.

The new lineup of Joanna Gruesome have just announced North American tour dates for the fall which include two NYC shows: October 30 at Rough Trade and October 31 at Shea Stadium. Tickets for Shea Stadium are on sale Friday (6/5) at 10 AM; and tickets for Rough Trade go on sale Friday at noon. All dates (which include a stop at Austin's Fun Fun Fun Fest) are listed below.