Russ of Alaric on stage with Noothgrush (more by Taylor Keahey) 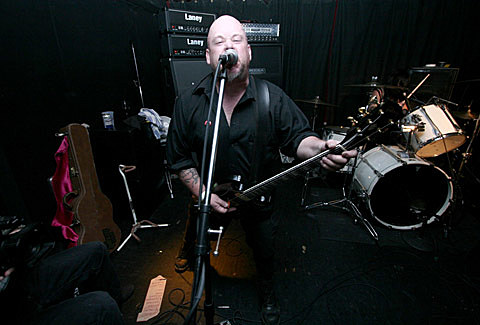 Alaric, an Oakland based crew featuring members of Noothgrush and Cross-Stitched Eyes, deal in deathrock, the crossroads of goth and post-punk/punk with a horror aesthetic that spawned bands like Christian Death, Rudimentary Peni, The Birthday Party and Killing Joke. Alaric released their excellent self-titled LP last year, and this year they are teaming with Portland-based goth-doom crew Atriarch to release a new split LP out on 5/15 via the venerable 20 Buck Spin.

The release sees Alaric handle three tracks while Atriarch tackles two, both of which are a seismic shift in direction from that of the material on the band's recent favorite Forever The End LP (100% less doom, more deathrock with touches of black metal). Stream the entire Alaric/Atriarch split in full below and for the first time, and pick up your copy via the label.

Speaking of Cross-Stitched Eyes, the band welcomes their new LP Decomposition today via Alternative Tentacles. Stream two tracks below, and order your copy via the label.

All streams are below. No tour dates to speak of which of course means no NYC yet, but fingers are crossed.