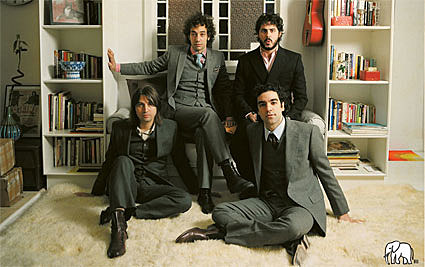 Albert Hammond Jr. is playing a free show at the Virgin Megastore in Union Square at 8pm today (July 8, 2008)

He's also playing a sort-of-private SPIN Magazine show in NYC tomorrow (July 9, 2008) at Hiro Ballroom . I have two pairs of tickets to giveaway to that one. To get them, email BVCONTESTS@HOTMAIL.COM (subject: hammond). Include your first and last name. Two people will be picked and contacted. For another chance of winning, you can try for one of the 200 TICKETS GBH is giving away.

Like the recent show at Mercury Lounge, all this Albert Hammond hoopla is timed to coincide with the release of his latest album "Como Te Llama" which you can currently stream in its entirety at AOL.

Albert is also playing McCarren Pool in August with Regina Spektor (not to be confused with Ronnie Spector who played McCarren Pool this past Sunday). All tour dates below....