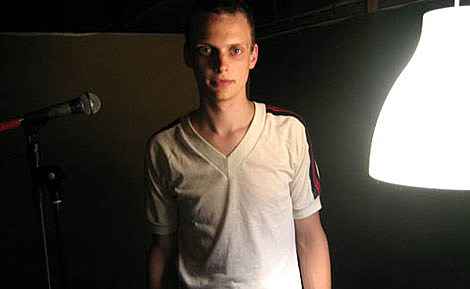 The Unicorns have attained a mystique since their break-up in 2005. Since that time, Nick Thorburn, has been anything but low key, launching Islands, Th' Cornn Gang Human Highway with Jim Guthrie, and even Juiced Elfers. What might be lost on all of this activity is that Thorburn wasn't the only creative drive behind The Unicorns spazz-pop.

The other ex-Unicorn, Alden Penner, has been making music in Montreal for a long time, in various projects including Adam and Alden, All Makes Parts and Collision and his solo work, which is what he'll be performing on October 4th at this year's Pop Montreal festival. He opens for Dominique Grange and Jacques Tardi.

At last year's Pop, Alden introduced Clues, a project featuring Brendan Reed (formerly of Arcade Fire) and Bethany Or. They're currently finishing an album with producer Mark Lawson (Arcade Fire, The Unicorns, Islands, Beirut, Final Fantasy) - to be released at Villa Villa Nola and on Constellation Records in winter 2008.

Alden's music is wistful, gentle, and a little bit quirky. Imagine the Unicorns with the volume turned down. He plays with pop music conventions in a manner that would suggest that he's taking the piss out of everything, but like Beck you can hear the amount of effort put into each song. Though he doesn't have much in the way of "official" releases, there is a 7" he released on Art School Dropout in 2005, and he scored the soundtrack to The Hamster Cage. There are also many bootlegs floating around the net. I strongly recommended you to check 'em out. One MP3 is available for download above.