New Zealand's Aldous Harding released her great 4AD debut Party last month, and we were thrilled to have her headline the BrooklynVegan x AdHoc Northside showcase last night (6/8) at Greenpoint's Park Church Co-Op, a truly gorgeous setting to see her. She played some songs solo with just her guitar, some as a duo with Jared Samuel (aka Invisible Familiars) on keyboards/guitar/backup vocals, and some as a four-piece with Jared, bassist Joan Wasser (aka Joan As Police Woman), and drummer Parker Kindred (who's large resume includes playing with Joan in the past). Joan and Parker's collaborations go back to working with Jeff Buckley, and they are/were both in Antony & the Johnsons (and much more).

My favorite part of the set was when the whole band was up there and they did Party single "Imagining My Man" (with Joan and Jared doing the "hey!" yelps), but even the parts that were just Aldous alone were just as gripping. Aldous has a truly astonishing voice, which comes across even more so live than it does on record. She can switch between a '70s Laurel Canyon style, a jazzy lounge singer, a high-pitched Joanna Newsom style, and a lower, more brooding voice. She sounds fantastic no matter which mode she's in, and I'd say the whole crowd was mesmerized at the way she could stretch out notes. When her voice was soaring, not a bit of chatter was heard from the crowd. She mentioned it was odd to play in a church, but I can think of no better setting.

Aldous doesn't just have the voice, she's got the look too. Like she's been at past shows, she was decked out in all white from head to toe, with a white guitar and guitar strap to match. Invisible Familiars looked equally professional, in hippie attire that looked like something his pal Sean Lennon's dad might've worn. (Incidentally, Aldous covered Paul McCartney's "Single Pigeon" and introduced it as the best song ever, as she's been known to do.)

Right before Aldous at the show were Tiny Hazard, who released their very good Ba Da Bing debut Greyland earlier this year. The best part about Tiny Hazard is how quickly they transition from pop music to genuinely weird music, and this really came across during their live set. One minute, the band is making some kind of mathy, arty sound collage with singer Alena Spanger bouncing from octave to octave and gleefully ignoring major-key scales, the next they are creating something that sounds genuinely beautiful. They're all clearly very talented musicians (including the guitarist, who's got some kind of effect pedal rig that makes his guitar sound almost like a keyboard), and were very enjoyable to watch.

Opening the night was a short, eccentric set by M Lamar. Rather than playing on the church's stage like the other two acts, he set up off to the side of the room at the grand piano. He played one continuous piece of music, for maybe about 15 minutes, with nothing other than that piano, a few effect pedals, and wordless singing. After that, he stood up, took a bow, and walked out of the room. It was an eerie, and very fitting, way to start the night.

Thanks to everyone who came to the show. You can see Aldous again at the Panache Northside showcase at Baby's on Saturday (tickets). Pictures of the church show are in the gallery above. 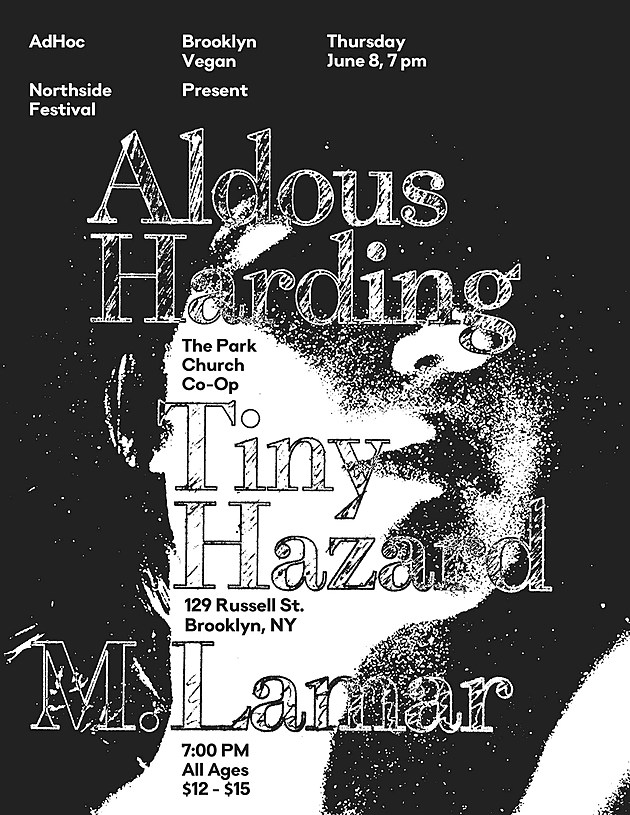