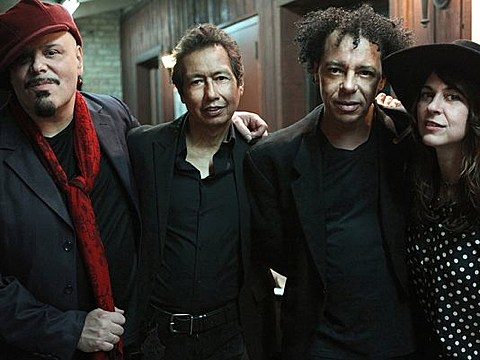 Alejandro Escovedo has been highly prolific in his 30+ years as a musician, putting in time in '70s punk band The Nuns, '80s alt-country bands Rank and File and True Believers, and he's been an active solo artist since the '90s (among other things). He's now fronting a new band, The Fauntleroys, where's joined by a lineup of other veteran musicians. The lineup includes Ivan Julian of influential '70s NYC punks Richard Hell and the Voidoids, Linda Pitmon, drummer in his band Steve Wynn's band The Miracle 3 and The Baseball Project, and veteran funk/soul/rock musician Nicholas Tremulis. The band will release their debut EP, Below The Pink Pony, on September 16 via Plowboy Records, the label co-founded by Dead Boys guitarist Cheetah Chrome.

The band premiered the first single form their EP, "I'm In Love With Everything," over at USA Today, and it's got the kind of classic rock n roll songwriting you'd expect from a group with this kind of resume. You can check it out below. The band played SXSW this year but no other tour dates are announced at the moment.