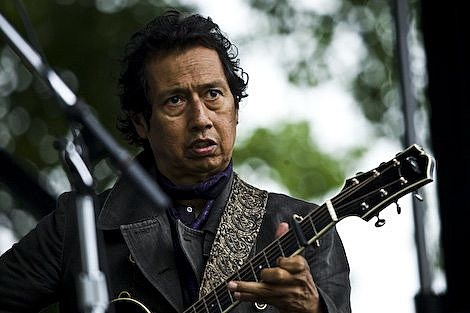 From the opening power chords of "Always a Friend" from "Real Animal" to the finishing frenzy of the Stooges' "I Wanna Be Your Dog," Alejandro Escovedo performed energetic versions of favorites ("Castanets"), selections from the upcoming "Street Songs of Love" album (the title tune was a standout) and covers of the Rolling Stones' "Beast of Burden" and "Sway."

He remembered recently deceased friends and collaborators Alex Chilton (the Box Tops, Big Star) and Stephen Bruton ("Crazy Heart") with a passionate "Sister Lost Soul." He thanked Mott the Hoople frontman Ian Hunter for standing by him during his bout with hepatitis-C in the new "Down in the Bowery." And he debuted "Gotta Have Faith" with "This is the one from the new album that the guy from New Jersey sings on." Bruce Springsteen would have been proud of the economy of the introduction.

This was the third of nine shows the band is playing before the June 29 release of "Street Songs of Love." Afterward, fans pleaded for a promise to return on the next leg. Cross your fingers now. It's not too early to start wishing. [Cincinnati.com]

The above review is from Alejandro Escovedo's gig on Friday, April 2nd at Southgate House in Newport, KY. He plays tonight (4/8) at the lovely Tarrytown Music Hall in Westchester with his band, and Graham Parker opening. Tickets are still on sale.

The show is one of the only NYC-area stops on his current tour. The other is an afternoon at "Concerts In The Studio" held in Freehold, NJ (about 90 minutes from NYC by train) on Sunday, April 11th. The shows take place in a photo studio next to the home of the hosting couple, Mark & Elaine who seem to be drawing a highly respectable group of performers for their shows. Also on the schedule is a gig with X members John Doe and Exene Cervenka on May 1st. Info on those and other upcoming shows is at their website.

All Alejandro dates and videos of both the studio and Alejandro (who was at SXSW), as well as the tracklisting for the above-referenced new album, are below...

Carrie Rodriguez "She Ain't Me" Concerts in the Studio in Freehold, NJ

Erin McKeown - "How to Be a Lady" Concerts in the Studio in Freehold, NJ