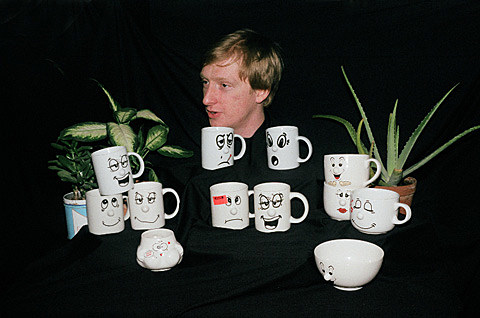 Alex Calder hails from Edmonton, Alberta, and was a member of Makeout Videotape, aka Mac DeMarco's old band. Like Mac, he's now part of the Captured Tracks roster and will release his debut album, Strange Dreams, on January 20. While not a million miles away from what his old bandmate does (hazy guitar pop), Calder's music seems a bit more serious. You can stream the "Strange Dreams" title cut below.

Alex is playing two Brooklyn shows this weekend: Cameo tonight (1/9) with Laced (Dustin from Beach Fossils' new band), and Donovan Blanc; and then Sunday (1/11) at Rough Trade, which is the store's one-year anniversary party that also features Steve Gunn, Dom Flemons, and DJs Jake B & Jesse Rosoff. The Rough Trade show is a free matinee, doors at 2:30 PM.

Calder also has an active YouTube page where he showcases his extremely dry sense of humor, offering up tutorials on how to play Grimes' "Oblivion," and John Mayer's "Daughters," how to get out stains from clothing, how to print a PDF document, and other emphera. Check out his "Live La Blogette Session" of "Strange Dreams" (brought to you by Pitchfork, Niosey, Vans and more) and a couple video tutorials, below.

You can also catch Steve Gunn in NYC later this year at Baby's All Right on April 1 (tickets), and stay tuned for his new collaborative album with Black Twig Pickers, Seasonal Hire, coming February 24 via Thrill Jockey.