Alex Winston at Santos in June (more by David Andrako) 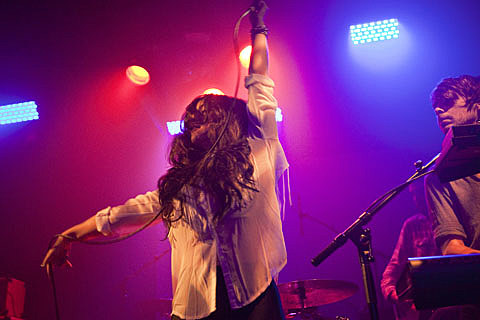 Alex Winston has been doing a good deal of touring behind her debut album, King Con, this year. She's kept pretty quiet since her last tour wrapped up earlier this summer, but has just squeezed in a NYC show which happens this week. It's part of the 'School Night!' monthly shows at The Bowery Hotel (335 Bowery) and goes down at the Manhattan venue this Friday (8/24) with Angela McCluskey, Bandana Splits (Dawn Landes' band), and DJ sets by Mat Devine and Computer Magic. Admission is totally free with RSVP. Doors are at 9 PM and you must be 21+ to enter. The flier for the show is below.

If you haven't heard King Con, it's a really solid album that operates in a similar realm of indie/pop crossover to Feist and the more anthemic Arcade Fire songs, and also throws in a bit of sugary Passion Pit falsettos and Joanna Newsom quirk. I've caught her live a few times too, and the show doesn't disappoint -- Alex is a totally confident, fun, and charismatic performer. You can stream King Con in full over at SPIN, and watch a couple live videos below. 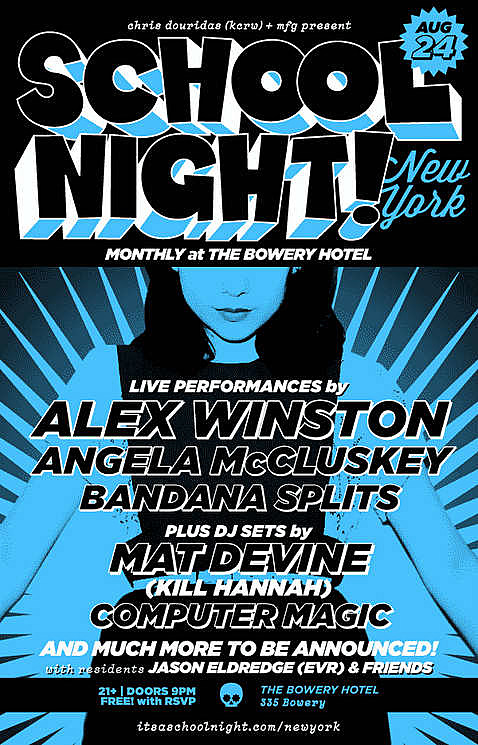