Alexis Taylor @ Manhattan Inn earlier in May (via @brooklynvegan instagram) 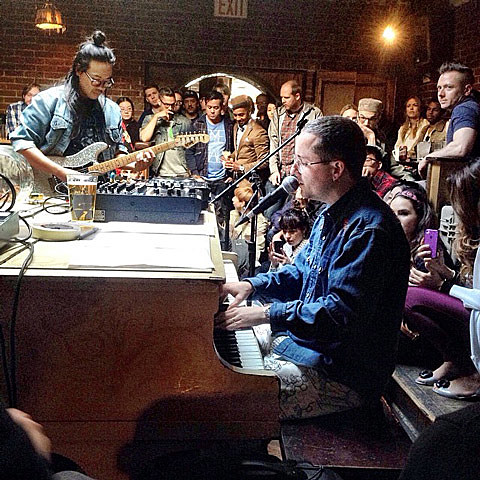 Alexis Taylor's new solo album, Await Barbarians, is out in a couple weeks (June 17) on Domino and he's got a new video for mellow single "Without a Crutch" which you can watch, along with the previously released "Elvis Has Left the Building," below.

You may have seen Alexis perform those and about half a dozen other new tracks when he played a very intimate solo show at Manhattan Inn earlier this month, right after the William Onyeabor tributes at BAM, where he was backed by Jonny Lam and current Hot Chip (and New Young Pony Club) drummer Sarah Jones. It was a nice set that also included a cover of Smokey Robinson's "Tracks of My Tears" plus Hot Chip songs "Look at Where We Are" and "Made in the Dark." If you missed that, Alexis will be back in NYC to play a solo show at Joe's Pub on July 14. Tickets are on sale now.

That seems to be the only North American date for Alexis currently. He will, however, be doing some DJ gigs over here around the same time, including one in NYC at Williamsburg club Verboten on July 10 with additional sets by Klangkarrussell, Headband + Hooligan, and Alex English. As to which members of the band will be doing the DJing, that's unclear but tickets are on sale now. Taylor will also DJ San Francisco's Mezzanine on July 11 with the Juan Maclean and Sleazemore.

And while we're on the subject, The 2 Bears, which is HC's Joe Goddard and mate Raf Rundell, will release their second album The Night Is Young in September. The first single, "Angel (Touch Me)," is out now and you can stream it below. You can also watch the Dan Henshaw-directed video which pays humourous homage to Wim Wenders' Wings Of Desire.

All Alexis Taylor tour dates, plus videos and streams, below....

Alexis Taylor - Without a Crutch