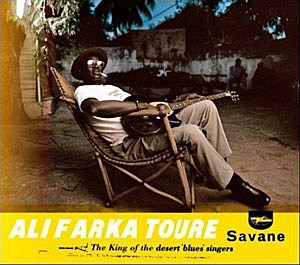 I like Ali Farka Touré's (RIP) 2006 album "Savane". I first listened to it when I realized it was, according to Metacritic, the most critically acclaimed album of 2006. It's a nice gift too - it even comes with a story: "most critically acclaimed", "up for a grammy", and sadly "Ali died of bone cancer" before he could even find out if he won it.

Well, it ends up "Savane" is not AS critically acclaimed as Metacritic, whose poll actually only included eleven critics, makes it seem. Today The Village Voice's annual Pazz and Jop came out. 494 critics were polled. "Savane" only placed #56. 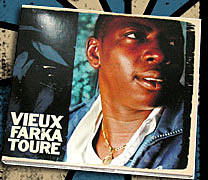 Back to Ali - he has a musician son named Vieux Farka Touré who lives in Mali, but is in the United States right now touring. He played his first "full" U.S. show in CT on Saturday (Feb 3):

All who love the music of late Malian maestro Ali Farka Toure have awaited the arrival of his 25-year-old son, Vieux, with heightened curiosity. After witnessing the son’s very first full concert in the U.S.—at Wesleyan University in Middletown, CT, on February 4, 2007 (it was the 3rd)—I am pleased to report that the kid has got it. [Afropop Worldwide]

Vieux has a CD, and a remix CD. Friday night (Feb 2) there was a record release party @ Pacha in NYC. That's where Vieux actually first performed in the U.S... 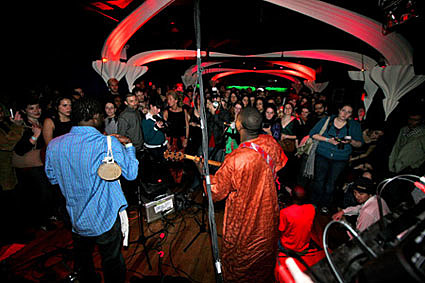 Derek Beres took the above picture at Pacha. Derek is also the producer of the Vieux remix CD. And speaking of Vieux remixes, you can make one yourself:

Creative Commons, Modiba Productions and Global Beat Fusion are pleased to present the Vieux Farka Touré / "Ana" Remix Contest. Vieux Farka Touré — a highly talented guitarist, singer, songwriter, and percussionist from Mali — is offering the audio source files from the song “Ana” online under a Creative Commons Attribution-NonCommercial license, so that producers worldwide can use the sounds in remixes and new compositions.

By the way, Derek also voted in Pazz & Jop (but not for Ali).