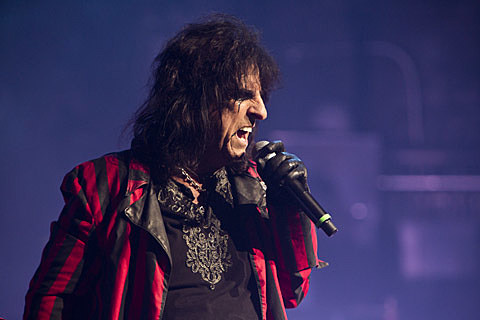 We already learned that Lady Gaga is doing a Bowie tribute at the Grammys this year, and the other rock legend who recently passed away, Lemmy, will get one too. This one includes some people who were a little closer to Lemmy than Gaga was to Bowie. It's by Alice Cooper and his band the Hollywood Vampires, which includes Aerosmith's Joe Perry, Guns N' Roses' Duff McKagan, and Johnny Depp, among others. Alice said to Rolling Stone:

"He was always funny," he continues. "I'm a 'healed' alcoholic and I haven't had anything to drink in 35 years. A lot of people that drink always feel a little bit like they owe an explanation to me. A couple weeks before his death, Lemmy came up to me and said, 'Alice, I've quit drinking.' And he's got a glass in his hand. And I go, 'Really?' And he says, 'Yeah, I don't drink whiskey anymore. I drink vodka.'" Cooper laughs. "And I went, 'Lemmy, do you think your liver has any idea what color the alcohol is?' He said, well it's a step down from whiskey.' And I went, 'OK. Any step's a good step.'" He laughs.

The Hollywood Vampires will also make the live debut of their song "As Bad As I Am" at the Grammys. It will be released as a bonus track on the deluxe edition of their 2015 debut that comes out three days before the performance.

Other recently-added Grammys performers include Kendrick Lamar, The Weeknd, Adele, Rihanna, the cast of Hamilton, and a BB King tribute by Chris Stapleton, Gary Clark Jr and Bonnie Raitt.

Alice Cooper is also touring this spring. Listen to the Hollywood Vampires song "My Dead Drunk Friends" below...