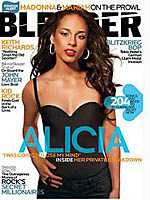 In a potentially controversial chat with Blender mag, Alicia Keys, 27, says, "Gangsta rap was a ploy to convince black people to kill each other. Gangsta rap didn't exist."

Ms. Keys, sporting a gold AK-47 pendant around her neck, says she has been reading books by some of the members of the Black Panthers.

She says the feud between East Coast and West Coast rappers, which led to the murders of Tupac Shakur and Notorious B.I.G., was fueled "by the government and the media, to stop another great black leader from existing." [Dallas News]