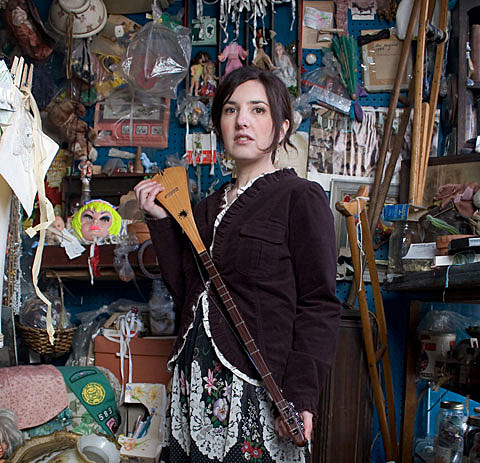 The resulting book is a collection of funny, cynical essays on meeting sketchy producers off of Craigslist, her obsession with Skopsy, a Russian castrati set, and battling fleas in her Williamsburg apartment. [The Brooklyn Paper]

Brooklyn singer/songwriter Alina Simone is not only celebrating the release of her new album Make Your Own Danger tomorrow (6/9) at Joe's Pub, but also her first book of personal essays, You Must Go and Win. She'll be reading from her book in addition to performing with a band that includes Conrad Doucette on drums. Alina's longtime friend Amanda Palmer will be a special guest at the show. According to Amanda's twitter, tickets are almost sold out.

Amanda Palmer has some of her own upcoming shows as well. She plays a show at a secret location in Boston on 6/25 (details at her site), and NYC-area shows at Maxwell's on June 22 and The Bell House on June 23. Both of those NYC-area shows, both with Sarah Borrello and Lady Lamb the Beekeeper, unfortunately sold out before we even realized they were announced to famous Amanda's 500,000+ Twitter followers.

Speaking of which, Alina started videotaping her friend Amanda 12 years ago. "She wanted to be famous" and "succeeded", says Alina in the video of lost 1999 footage she recently posted to Youtube. Check that out below.

You can pick up a copy of Alina's book You Must Go and Win and her album Make Your Own Danger as MP3, CD, and LP. Grab two songs off the album for free above too.

All dates, some videos where Alina's friend Eugene Mirman gives her book marketing advice, and Alina's video of Amanda Palmer, below...