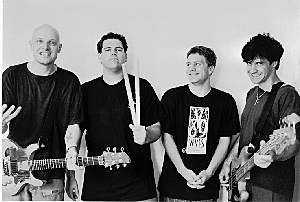 As a youngster, my punk rock friend Bob was constantly trying to get me to listen to more than just metal. He succeeded in getting me into groups like Pegboy, Black Flag, The Sex Pistols, The Clash, Samhain, The Misfits, Public Image Ltd. and the like. But two acts that really appealed to me at the time and ended up being the soundtrack to the summer of 1992 were The Descendents and ALL.

In all my 32 years on earth there have been many opportunities, yet I have yet to see either band live. Luckily that's (sort of) going to change when ALL invades the east coast, for the first time since 2002 (the first time since 1988 with Scott Reynolds), with a four show mini-tour that will bring them to Brooklyn's Music Hall of Williamsburg on Saturday, January 9, 2010 (tickets onsale 11/18 at noon). ALL. On a Saturday night. Practically in my own back yard. YES.

For those of you who have been living in a cave, ALL evolved from The Descendents, a band who once claimed they couldn't sell out a telephone booth but whose impact on rock is undeniable. The Descendents created ALL, a concept celebrating the satisfaction that comes from one's highest achievement, eventually naming their new band in tribute to their own personal ideology.

The line-up will consist of Scott Reynolds on vocals, Bill Stevenson on drums, Karl Alvarez, on bass, and Stephen Egerton on Guitar. Off With Their Heads and Shot Baker open all shows. The tour dates are below...