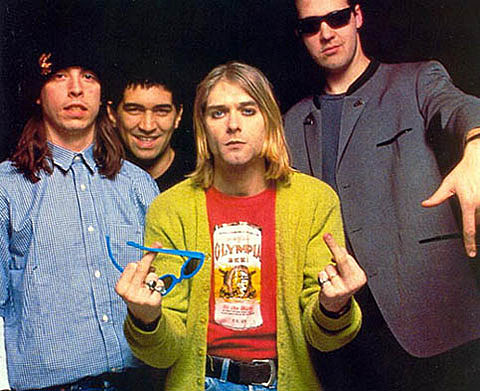 Like he did on stage in California in December (they played "Marigold"), Dave Grohl is bringing together the surviving members of Nirvana for the seventh Foo Fighters album, due out April 12. Produced by Butch Vig, who produced Nirvana's breakout album Nevermind, Grohl has chosen to record the entire album in his garage on entirely analog equipment. He has also confirmed that Nirvana's touring guitarist Pat Smear is again a full time member of Foo Fighters and has recorded on every track on the new album. But most importantly, Nirvana bassist Krist Noveselic recorded bass and accordian for the track "I Should Have Known." Butch Vig talked to MTV News about the recording:

"We had Krist Novoselic come in and play bass [on the song], and I'm not exactly sure what the song's about, but to me, it seems there's definitely some references about Kurt Cobain, and it's one of the most primal, raw things the Foo Fighters have ever done, and I think it's one of the best tracks on the record," Vig said. "It's distorted and raw, and Dave, the take on the vocals is like the first take he did at the end of the song. He's just blowing his lungs out. ... We played the record for some people yesterday, and the whole record is great, but that song, God, it's quite an emotional roller-coaster ride when you hear it."

The album also features guest vocals from Bob Mould of Husker Du. You can listen to snippets at FooFighers.FM.

The Foo Fighters are also planning a documentary spanning Dave Grohl's career from his time as the drummer of Nirvana through The Foo Fighters' 16 year career. The film also includes in-depth footage regarding the release of the new album. The film will be making its premiere at the SXSW Film Festival, and the band is rumored to be performing at SXSW, as are Queens of the Stone Age and the Strokes (all rumors at this point).

Other festivals Foo Fighters will appear at include the recently announced Sasquatch Festival, Hang Out Fest in Alabama, and according to Greg Kot, Lollapalooza along with Eminem and Muse.

In other Dave Grohl related news, on Wednesday, Matador Press tweeted an illustrated letter from a 15-year old Dave Grohl to Seattle band Aerobic Death about a compilation tape in 1984. That letter and all tour dates below... 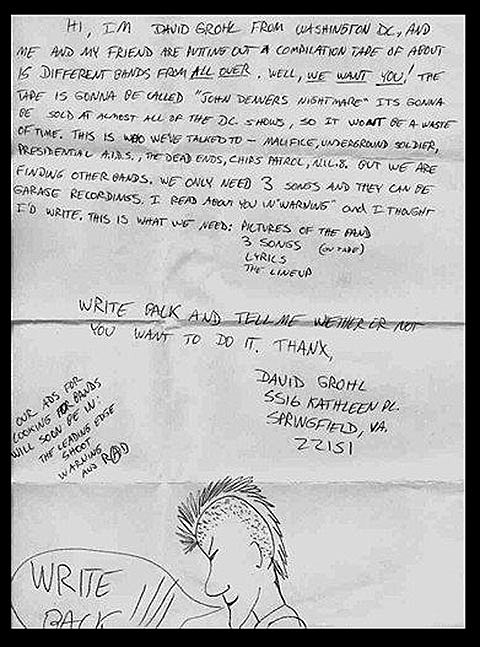