Masked men opened many of the YLT Hanukkah shows this year 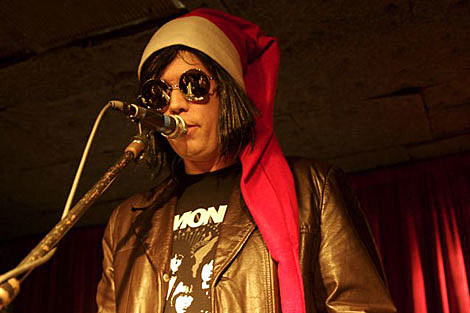 That is the list of special guests and openers from this year's 8-night Yo La Tengo Hanukkah concert run at Maxwell's in Hoboken. The eighth night of Chanukah (aka the last show) was December 28th and three nights later The Feelies and Vivian Girls opened for Yo La Tengo at their New Years Eve show at Wellmont Theatre in Montclair (making their grand total nine shows this holiday season).

How was the New Years one? Did anyone go to all nine shows? Other thoughts? Memories? Best night? Anything? James McNew of Yo La Tengo's Top Albims of 2008

that list via Matador. Three of them were openers and/or guests this year.

Here are some videos....

Pictures above via the band's own Hanukkah show diary by Dawn Sutter Madell. Hanukkah t-shirts still available at YLT's site too.