photo: All Pigs Must Die at SXSW 2012 (more by Fred Pessaro) 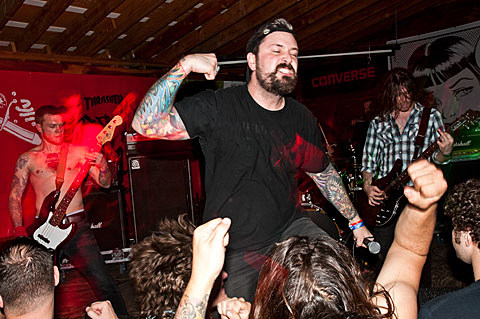 Boston crust-metal rippers All Pigs Must Die (members of Coverge, Bloodhorse) have announced two shows for December: a hometown-area date on December 5 at the Middle East in Cambridge with Wormwood and V-Sect (tix), and a NYC date at The Acheron on December 4 with Deathcycle, White Widows Pact and Wrist Deep (tix).

All Pigs Must Die haven't released anything new since 2013, but they are pretty much a must-catch live band due, if nothing else, to the presence of best-drummer-on-planet-earth candidate Ben Koller of Converge. Check out a video of All Pigs Must Die at Roskilde earlier this year, along with a video taken from a GoPro strapped to Ben Koller's head during a Converge show, below.