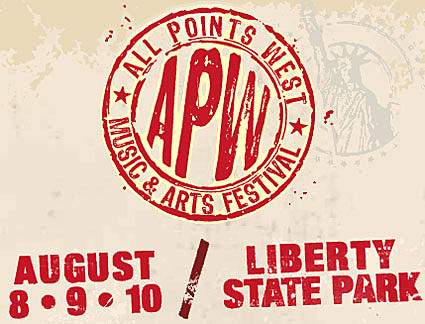 Radiohead is in fact headlining two days (Friday and Saturday), and Jack Johnson is also one of the headliners (Sunday) (who wants to stay out late on a Sunday anyway?). More details below...

Radiohead have been confirmed as both the Friday and Saturday night headliner for the first-ever ALL POINTS WEST MUSIC & ARTS FESTIVAL. This marks the first time that a cutting-edge band will headline multiple nights of a major U.S. music festival.

Jack Johnson will headline Sunday night of the three-day, multi-stage music and arts festival taking place August 8, 9 and 10 at Liberty State Park in New Jersey. The ALL POINTS WEST MUSIC & ARTS FESTIVAL will also feature performances from Underworld, Kings of Leon, Rodrigo y Gabriela, Cat Power, The Roots and The New Pornographers, among others. More than 40 acts will appear on three stages throughout the 80-acre historic location with panoramic views of the Statue of Liberty, Ellis Island and the Manhattan skyline.

Tickets for ALL POINTS WEST go on sale Friday, February 29 at 12 Noon (ET) via www.ticketmaster.com only. Single day passes are $89 and three-day passes are $258. A portion of the event's proceeds will benefit "Friends of Liberty State Park." The Friends of Liberty State Park is an open space advocacy volunteer organization dedicated to the park's future as a free, green and non-commercial, urban waterfront oasis.

The ALL POINTS WEST MUSIC AND ARTS FESTIVAL is being created in a "green" festival environment. Initial "green" plans include on-site parking for carpoolers only and ample public transportation to and from the site. Ferry service will be available from Manhattan directly to the festival grounds; exact details with ferry schedules will be announced at a later date. Additionally, light rail service via NJ Transit will run directly to the festival grounds. Meanwhile, a limited supply of on-site parking is reserved exclusively for carpoolers. Carpool parking passes are available either as single days for Saturday and Sunday or as a three-day pass for the weekend. Note: four concert tickets are required in order to qualify for carpool parking.

The festival's name is inspired by the area's rich history, particularly Ellis Island and the NJ Central Railroad terminal located on the festival site, where many arriving immigrants boarded trains for ALL POINTS WEST.

ALL POINTS WEST is produced by Goldenvoice/AEG Live and Liberty Events in association with the HighLine Ballroom. For up-to-the-minute information on the ALL POINTS WEST MUSIC & ARTS FESTIVAL, visit www.apwfestival.com.