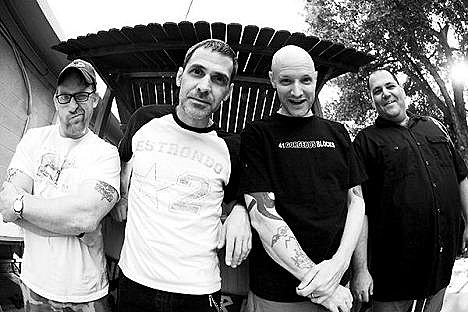 Due to unprecedented demand for snarky, high-speed, fun-loving punk rock, All (Scott Reynolds on vocals, Bill Stevenson on drums, Karl Alvarez, on bass, and Stephen Egerton on guitar) have tacked on an EARLIER show at Music Hall of Williamsburg on 1/9 with doors opening at 5PM, just four hours before the doors open for their previously announced shindig at the same venue. Tickets for the early show go on sale Wednesday (12/2 at noon). The later show is still on sale now. Off With Their Heads and Shot Baker are on tap to open both shows as well as the entire tour.

So why not add a second show one night later? One reason might be because Scott Reynolds (of All), Off With Their Heads and Shot Baker will share a bill that night (1/10) at Mercury Lounge. The three artists will be providing support for old school Cali punks Agent Orange. Tickets are on sale. The intimate NYC show is part of a greater Agent Orange tour that kicks off in Florida at the tail end on 2009 and extends through the end of January.

Scott Reynolds dropped an LP in early 2008 as part of Scott Reynolds & The Steaming Beast - a band which also featured Steven Drozd of The Flaming Lips and producer Dave Fridmann in their ranks. Pick up a copy of that record here.

All, um, All and Agent Orange tour dates and a recent All live video are below...