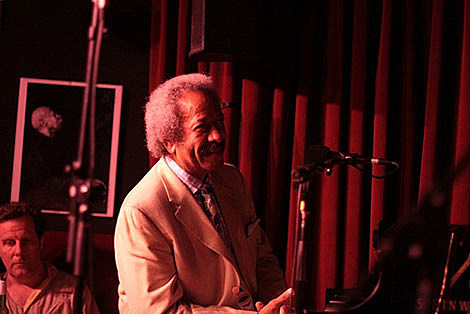 The New Orleans pianist Allen Toussaint hinted at the scope of his musical lore in a whimsical solo montage halfway through his early set at the Village Vanguard on Tuesday [5/19] night. Fragments of old New Orleans songs (like "Big Chief"), classical pieces, boogie-woogie, "The Sound of Music" and other tunes interrupted one another and gradually mingled, giving barrelhouse flourishes to a Chopin prelude. After a few more segues Mr. Toussaint called Elvis Costello out of the audience to sing "Ascension Day," a song from the 2006 album they made together, "The River in Reverse." [NY Times]

Allen Toussaint has been at the Village Vanguard since that Tuesday, May 19th show. That run continues through Sunday, May 24th.

The pianist is playing with the Bright Mississippi Band, a group that recently cut an album of the same name for Nonesuch. That band (on record and live) includes clarinetist Don Byron, trumpeter Nicholas Payton, bassist David Piltch, percussionist Jay Bellerose and guitarist Marc Ribot. Ribot just ended his weeklong 55th-birthday retrospective on Sunday, May 16th.

Elvis Costello also recently made an appearance on 30 Rock, and has a show coming up at NYC's Beacon Theater.

Watch a video of Costello and Toussaint on Letterman, with all Allen Toussaint tour dates (including Bonnaroo), below...