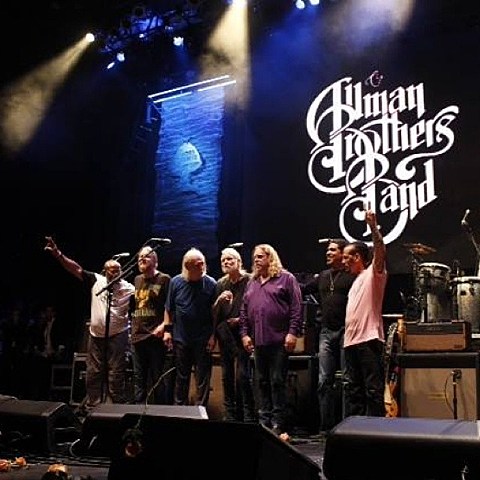 The Allman Brothers Band came out of the gates with "Little Martha" > "Mountain Jam" just before 9 p.m. and finished the third set just before 1 a.m. with the second half of "Mountain Jam" before putting a cap on the evening with one last "Whipping Post" encore and even tacked on "Trouble No More" for good measure (The Allmans recorded a rendition of the Muddy Waters' classic for their 1969 debut album, but more importantly it was the first song the original band ever played). In between there were tons of emotional moments as the lineup put their all into the final performance of such beloved and fitting songs like "Ain't Wasting Time No More," "Midnight Rider," "One Way Out," "Southbound," "The Sky Is Crying" and "Revival."

OG Allmans Gregg Allman (Age 66), Butch Trucks (Age 67) and Jaimoe (Age 70) stepped up to create a powerful force throughout the marathon concert. Once again, "Dreams" and "In Memory Of Elizabeth Reed" served as the improvisational meat of the second set with guitarists Warren Haynes and Derek Trucks adding an extra gear to their transmissions. Gregg told the crowd "the night is still young!" before "Liz Reed" giving fans a hint of what was to come. The third set was unannounced, so there were plenty of missed trains for attendees who weren't going anywhere when they found out the third set was in front of them. The Allman Brothers Band were met with a huge standing ovation and the sound of stomping feet as they finally left the stage. [Jambase]

The Allman Brothers Band brought their lengthy career to an end last night (10/28) at NYC's Beacon Theatre, their sixth and final show there in eight nights. The show included three sets and an encore in four hours, so needless to say they went out with a bang. If you missed the show or just want to relive it, it will air in full on SiriusXM's Classic Vinyl Channel a few times this week. Check out those times here.

Videos of "Whipping Post," "Trouble No More," and their farewell speech during the encore, with the full setlist from their final show, below...