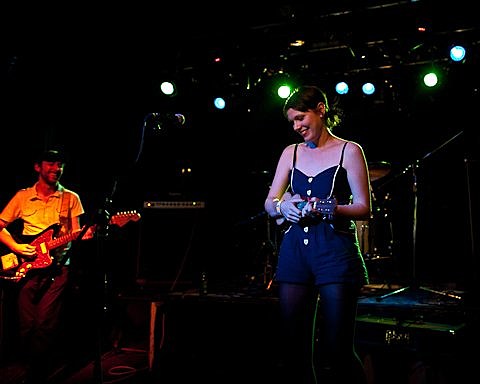 Charming UK indiepoppers Allo Darlin' are coming back to America this week for a two week tour that includes two stops in NYC during CMJ and then also the Mondo Halloween Party at The Rock Shop on October 30.

The band were last here in May for the 2010 NYC Popfest where they were one of the weekend's big hits, energetic and fun and never too saccharine, like a sprightly Camera Obscura. Elizabeth Morris is just a natural performer -- and great songwriter -- and the band's debut LP is a real treat. You can download two songs from it at the top of this page and, if you're willing to give their label your email address, you can also download their great new single "If Loneliness Was Art" here. They band still doesn't have an American label.

Allo Darlin' are definitely one of CMJ's don't miss bands though, right now, if you're busy on Thursday (10/21) from 6 - 9PM you might be out of luck. That's when both of their announced shows are happening. There's an Impose/Pop Jew day show at The Woods (they're scheduled for 6PM), that also features Dream Diary, Chinese band Hedgehog, Sleepies, Bright Lights, and The Othermen. Then just a couple hours later (8PM), Allo play Kenny's Castaways for an official CMJ show. Maybe they'll add some more shows? We can hope.

Before CMJ, Allo Darlin' play a few East Coast dates, including Philly, Boston, and Washington D.C. After CMJ, they head west for a few shows in L.A., San Francisco, Seattle and Portland before returning for that Mondo party at The Rock Shop.

The video for "If Loneliness Was Art" and all tour North American tour dates are below.

Allo Darlin - If Loneliness Was Art