Hope you all survived Record Store Day. I didn't find most of what I was looking for (most of which was UK only) but I did get that great Lee Hazlewood comp on Light in the Attic. Hope you found what you wanted the most. Lots of good stuff this week, so let's get into it.

The most TWII show of the week happens tonight (4/24) at Mercury Lounge: Allo Darlin' and The Wave Pictures. It's the start of the two bands' tour together that will wrap up on Sunday, May 20 for the last day of the NYC Popfest which is happening at Littlefield (w/ Ladybug Transistor, White Town and about six more that day). All Allo Darlin'/Wave Pictures tour dates at the bottom of this post.

Allo Darlin's second LP, Europe, came out last week to pretty much across-the-board acclaim. It's a little more melancholy than the band's debut, with a lot less ukulele this time out. Maybe that seems like a good thing, but I must say I miss the exuberance of Allo Darlin's debut. The more subdued nature of the songs and production make it sound like a Camera Obscura album much of the time, a comparison I would've never made before. But Elizabeth Morris' songwriting and voice are still in fine form, it's all just a little more "mature."

You can stream Allo Darlin's Europe at the bottom of this post. I'm sure one thing that hasn't changed is Allo Darlin's ability to charm in the live setting.

The same goes for The Wave Pictures who I will always go see live even if I'm not so crazy about the album they're touring to support. Not that they change so much from record to record. Their new album, Long Black Cars, is pretty good (listen at Spotify) I think but much like the rest: Dave Tattersall spins fascinating, funny stories with a singsong delivery. Most of their albums sound like they were recorded live, but it always comes off a million times more compelling when you actually see them play. Tattersall is also one of the funniest between-song banterers of our age. Also funny: the Darren Hayman-directed video for their song "Spaghetti" which you can watch below.

Here We Go Magic will release their third album, A Different Ship, in a couple weeks (May 8 specifically) and soon head out on a short UK tour before covering most of North America with Hospitality. (All dates are below.) Before that, HWGM play this Friday (4/26) at Knitting Factory with Glass Ghost.

The new album has an interesting birth. Stuck playing a pre-noon set at Glastonbury 2010, the groggy band were playing to a groggy crowd, none of whom seemed to be having any fun. Except for two guys dancing right up front, who turned out to be Thom Yorke and Nigel Godrich. The band met Yorke and Godrich after their set and Godrich turned up at more European shows... and ended up producing Different Ships. This is the bands first album that didn't start with Luke Temple doing demos on his own, and with the band incorporated from the beginning (and working in Godrich's studio). While still boyant and dreamy, Different Ships feels a little bigger, a little more fully formed than the previous two. You can stream "Make Up Your Mind" at the bottom of this post as well stream new single "How Do I Know?" at Secretly Canadian's SoundCloud page.

The Feelies at Prospect Park in 2011 (more by Tamara Porras) 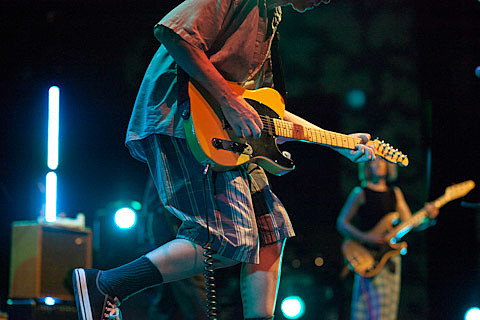 And finally, while Feelies shows have become less rare since the band actually made a new album, but any chance to see one of the most influential NYC-area bands of the last 30 years is one you shouldn't pass up. And you have that chance on Friday (4/27) at the Bell House. While bands from Luna (who had the Feelies' Stanley Demeski on drums at the beginnning) to The Strokes have taken from them, there's no substitute for that Bill Million/Glen Mercer guitar interplay that still sounds like magic.

You can listen to the Feelies' terrific album from last year, Here Before, as well as some of their classic ones, at Spotify. The Feelies also play Saturday (4/28) at Club Helsinki in Hudson, NY if you're up that way and a few more scheduled dates throughout the summer which are further down this post.

That's the big stuff this week. Day-by-day picks of things not covered above, are below.

Diehard are at Union Hall tonight with Everest, Benjamin Cartel (of Kaiser Cartel) and Resistor. Diehard just released a video for their theme songwhich you can watch below. It's from last year's The Times We Didn't Have Fun which you can download for free from Bandcamp. Diehard also play Saturday (4/28) at the Rock Bar in the west, West Village.

One of the coolest cats around, Nick Lowe is at at Town Hall with nearly 40 years worth of amazing songs in his arsenal. Last year's The Old Magic was another winner from the Basher and you can stream it at Spotify and watch the comedy star-studded video for "Sensitive Man" below.

Even though Overlord sounds like a metal name they're actually full-on indiepop. Please don't mosh (or maybe do?) at Cakeshop tonight when they play with Folklore, Pale Lights and The Hairs. 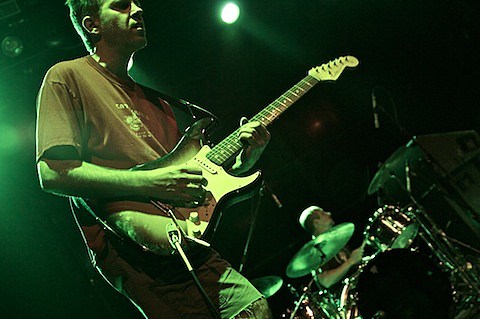 If you couldn't get ticket to Thursday's Archers of Loaf show at Bowery, tickets are still available for their show at Music Hall of Williamsburg tonight.

Ok, that's it for this TWII. Tour dates, flyers, videos and music streams are below.