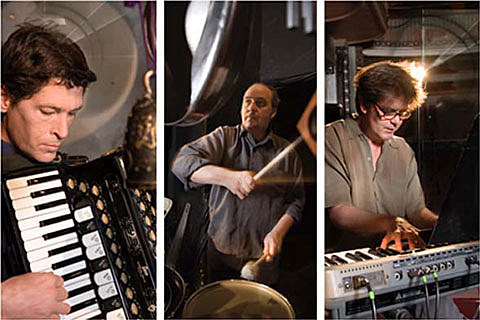 Performing at prestigious film festivals and cultural centers in the US and abroad (The Telluride Film Festival, The Louvre, Lincoln Center, The Academy of Motion Pictures, the National Gallery of Art and others), Alloy has helped revive some of the great masterpieces of the silent era.

An unusual combination of found percussion and state-of-the-art electronics gives the Orchestra the ability to create any sound imaginable. Utilizing their famous "rack of junk" and electronic synthesizers, the group generates beautiful music in a spectacular variety of styles. They can conjure up a French symphony or a simple German bar band of the 20's. The group can make the audience think it is being attacked by tigers, contacted by radio signals from Mars or swept up in the Russian Revolution.

Alloy collaborates with some of the worlds best archives and collectors (such as the George Eastman House, The British Film Institute, Paramount pictures, Film Preservation Associates and The Douris Corporation) to present audiences with the very best available prints of some of history's greatest film.

Mission of Burma's Roger Miller has been a member of the Alloy Orchestra since 1999, when he replaced original member Caleb Sampson who took his own life. Between the reincarnated Mission of Burma, Birdsongs of the Mesozoic, Alloy, the occasional guitar lesson and other projects, Roger keeps busy.

Mission of Burma are playing twice in NYC at the end of January. Alloy Orchestra are playing three free NYC shows in February. More details below...

Next month at the World Financial Center's Winter Garden, Charlie Chaplin will get chased up a staircase to the synchronized beats of a live, original score - but he's not the only film icon moving along to all new music.

The Tramp's antics, accompanied by the Alloy Orchestra, will be one of many highlights during Silent Films/Live Music, a free series from February 2nd through 4th. The Winter Garden, which Time Out New York named one of the city's top five venues to watch cult films, will celebrate five side-splitters from the Silent Era over three nights.

The series begins on February 2nd with the "Masters of Slapstick" film shorts, featuring Chaplin, Fatty Arbuckle, and Buster Keaton in One Week (1920), Back Stage (1919), and Easy Street (1917), respectively. The full-length feature Speedy (1928), starring Harold Lloyd, will screen February 3rd, and a swashbuckling Douglas Fairbanks in The Black Pirate (1926) will complete the series February 4th.

The series is curated by WNYC's John Schaefer, whose influential New Sounds program was called "the #1 radio show for the Global Village" by Billboard Magazine. Schaefer has partnered with Arts World Financial Center for more than 10 years in finding novel ways to bring modern music to the Winter Garden.

"The Winter Garden is the perfect space to experience Silent Films/Live Music," said Debra Simon, Artistic Director of Arts World Financial Center. "Seeing these films on our big screen accompanied by Alloy Orchestra's inventive scores will give an entirely fresh perspective to the silent celluloid."

Arts World Financial Center is the East Coast's largest presenter of free, year-round performing and visual arts. Other winter 2011 season highlights include the Hector Del Curto Tango Orchestra recreating the romantic tradition of orquesta tipica on Valentine's Day with lessons and a performance from some of the world's leading tango musicians and dancers (February 14); New York Opera Society's tribute to Paul Robeson (February 16); and New York Classical Theatre's three-week production of The Rover, a 17th Century Restoration comedy that will take audiences on a rousing journey throughout the World Financial Center's 3.5-acre complex (March 2-20).

The complete schedule for Silent Films/Live Music is as follows:

This trio of short films features some of Hollywood's greatest comedians. Keaton plays a newlywed trying to build a home, Arbuckle stars as a bumbling stagehand turned actor, and Chaplin is a police officer on a mission. Each of these shorts is a testament to their comedic genius and introduced audiences to some of the actors' best sidesplitting stunts.

Starring comedian Harold Lloyd as the eponymous hero, this film recounts Speedy's attempts to save the last horse-drawn trolley bus from greedy railway magnates. Shot on location in New York City and featuring several landmarks including Yankee Stadium, Luna Park, Columbus Circle, and the Brooklyn Bridge, this was Lloyd's last silent film and one of the works nominated for the short-lived Academy Award for Best Director of a Comedy.

In this classic tale of revenge, Douglas Fairbanks, "The King of Hollywood," is bound by honor to avenge the death of his father at the hands of a pirate gang. Disguising himself as a sea-faring adventurer, Fairbanks is able to infiltrate the murderous band, kill their captain, and escape to safety. Filmed in 1926, The Black Pirate was shot entirely in two-strip Technicolor and stars Donald Crisp, Sam De Grasse, and Billie Dove.