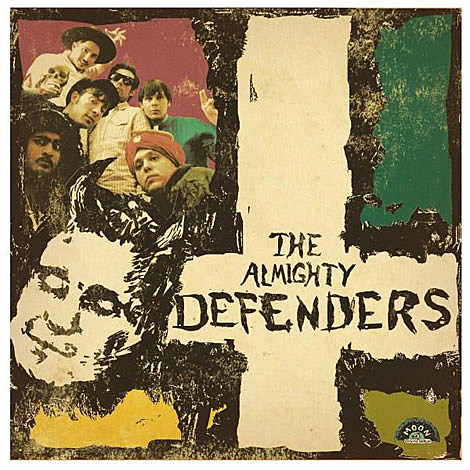 "The Almighty Defenders self-titled debut will be widely available on September 22nd at your favorite independent record store and digital service provider. But for all you awesome people/Black Lips/King Khan & BBQ fans you can pre-order it now off the Vice Records store. As reward for your undying loyalty to Vice we are throwing in a bonus track, "Ghost With The Most" (recorded live at the Practice Space) when you pre-order the album off us.

Like winning? New Practice Space, new album, and bonus track? Whose Tuesday just stopped sucking? Oh, we will send you "Ghost With The Most" as soon as your order goes through!" [VICE]

Two track from that supergroup's new album are also available above the cover art for free MP3 download.

Tickets are now on sale for a live Almighty Defenders show at Maxwell's on October 25th. The NJ date is right before King Khan and BBQ head out on a short tour with the Dum Dum Girls which brings them into NYC on October 30th and 31st. The Black Lips will be in NYC, opening for Yo La Tengo at Roseland, this Friday night (September 25th).

The above-referenced episode of VBS.TV Practice Space, can be watched below...