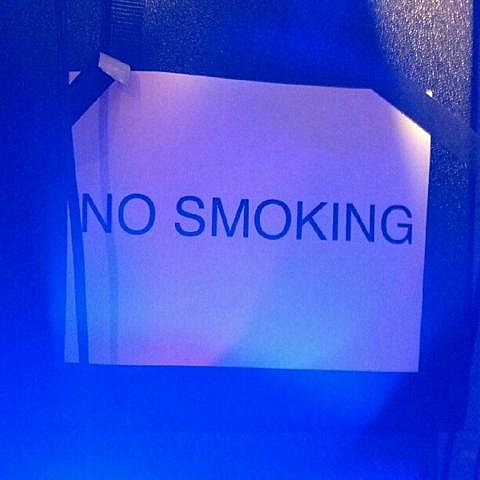 Following 285 Kent's lead, as of October 1, 2012, five-year-old Williamsburg DIY spot Death by Audio is now a NO SMOKING venue. Our clothes thank you.

Speaking of, Great Design says S. 2nd & Kent is "Where Sound is Born." No show at DbA tonight, btw.

Death Grips finally announced a tour! It doesn't include any NYC dates at the moment, but they tweeted, "more tour dates to be announced! (pretty much all the missing spots being mentioned).'

You can also make money off the new Death Grips album.

Willis Earl Beal, who is on tour now, released a "free digital Principles Of A Protagonist soundtrack EP of 5 re-recorded songs from Acousmatic Sorcery" via BitTorrent.

Speaking of BitTorrent and Death Grips, the rap-noise crew are the most downloaded artist on BitTorrent for the first half of 2012, with over 34 million downloads, beating Counting Crows, DJ Shadow, and Pretty Lights.

Generation Records will give you a free ticket to one of the Rev25 shows at Irving Plaza with purchase of a Chain of Strength t-shirt.

We premiered a new Riverboat Gamblers video on BV Austin.

You can stream the new Converge record in full.

Touche Amore do a great cover of The Replacements' "Unsatisfied" for their new split with The Casket Lottery (out now on No Sleep Records). Meanwhile, The Casket Lottery offer their take on Beach House's "Myth." Stream the entire release (both bands offer an original song as well) at the No Sleep Bandcamp.

Legendary black metal crew Von, widely considered to be the first US black metal band, have released a new song (!) in "Jesus Stain" from their upcoming Satanic Blood due on Oct 31. Stream that track below courtesy of Decibel Magazine.

Public Assembly is hosting a hummus cook-off and raffle on October 14 to help raise money for the NYC Coalition Against Hunger in memory of Craig Murphey.

Meanwhile you can catch Silver Apples at Public Assembly.

Then you can catch Silver Apples at 92YTribeca.

Help save the Historic Slave Theater in Bed-Stuy.

Ever wonder what it's like to be in the studio with The Fall's Mark E. Smith? This video pulls back the curtain on one of rock's most enduring frontmen. Watch below. Warning: Although it's in English, you might not understand a word of it:

The first Presidential Debate is tonight and Brokelyn offers up a drinking game to help get you through it.

Klaus sez: The next season of The Walking Dead begins on Sunday October 14th on AMC. While the show boasts some of the worst acting I have ever seen on television, the show also boasts some of the best gore effects I have ever seen on television. Anthrax axe-man Scott Ian recently visited the visual effects lab responsible for WD's incredible zombie-gore for his new YouTube show, . CHECK IT OUT YO

Smashing Pumpkins played Austin and are now on tour. The NYC show is at Barclays Center on Halloween.

Oh, and MELLON COLLIE AND THE INFINITE SADNESS is being re-released in multiple physical and digital configurations, including an expanded 5CD+DVD Deluxe Box Set.

Monster artist Chet Zar, who does Tool's scary visuals, will be the subject of a documentary, if this Kickstarter is successful.

The theme of this year's Village Halloween Parade is "Tick! Tock!"

Make sure you have tissues handy before watching this one. Ben "Macklemore" Haggerty and Ryan Lewis made a video for Same Love in support of Music for Marriage Equality. Washington State passed a gay marriage bill in February, but Referendum 74, up for vote in November, puts the bill's future in the hands of the public. Same Love has been racking up views on YouTube, and hopefully will help inspire people to turnout at the polls and vote to approve Referendum 74.

Memory Tapes is releasing a new album called Grace/Confusion via Carpark on 12/3. Listen to one of its six songs:

And here's that Von stream we mentioned above: