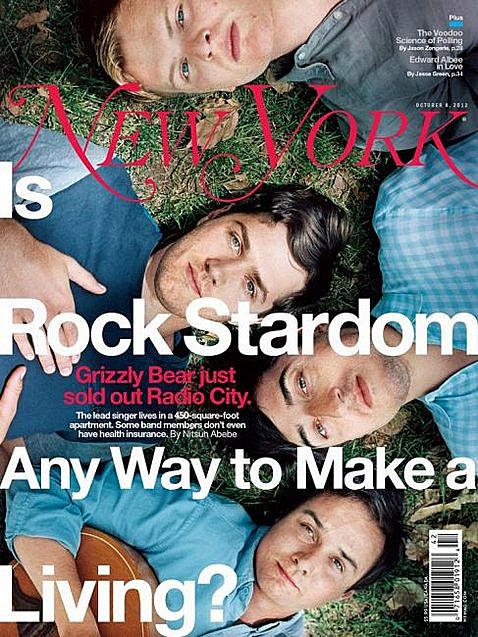 Grizzly Bear are on the cover of the new issue of NY Magazine, which makes two weeks in a row that Brooklyn was prominently featured.

Despite making it into Billboard's Top 10 with their new album, Shields, the band still aren't making a lot of money.

Check out pictures from the show they just played in Chicago with Lower Dens.

And speaking of Brooklyn, get ready for Brooklyn Bowl Las Vegas.

"The Artwork of Robert Pollard & Tobin Sprout" is opening in Brooklyn soon. Meanwhile check out our recent Guided by Voices pictures from both Austin and the Deluna Fest in Florida.

Crystal Castles and HEALTH play Roseland on Wednesday (10/3). We're giving away tickets here and on our Facebook too.

Also on Wednesday, M83 plays Hammerstein Ballroom and we're giving away tickets to that on Facebook too. Tickets are also still on sale.

The Compact Disc turns 30 years old today. The first CD pressed in America was Bruce Springsteen's Born in the USA (though Billy Joe's 52nd Street came out in Japan before that). What was the first CD you bought?

Speaking of Bruce Springsteen, Kenny's Castaways, where he used to play is hosting their final show tonight.

Producer and TV On the Radio member Dave Sitek has launched Federal Prism, "a new record label where Sitek will personally record, mix, produce, and release a series of limited edition 12-inch vinyl picture discs with a uniquely curator-driven perspective. The vinyl will be limited to 500 numbered copies each with a jacket personally hand silkscreened by Sitek."

Federal Prism's first release is "Destroyer" by Telepathe. "The b-side of the vinyl will feature a remix by Nine Inch Nails' Trent Reznor with Alessandro Cortini and Atticus Ross. Sitek adds, "I told Trent I was starting my own label and would love to have him remix something on the first release. I sent him the session and before he actually said 'YES', he sent back this mighty dark space that he, Alessandro and Atticus had built for me! I was shocked and am certain I will have to keep ripping them off for years!"" It's on sale now.

Speaking of Trent Reznor, he says his his band How To Destroy Angels, have "formally partnered with Columbia Records for our next series of releases. The first of these will be available in November and it's called An Omen EP."

More scary: As if it wasn't bad enough that Bruno Mars has been announced as the host of the 10/20 episode of SNL, they're letting him be the musical performer for that episode too!

But here's some good news: Now That's What I Call Music 83 will reportedly be the last in the series.

MEN - Let Them Out Or Let Me In (for Pussy Riot)

Blondie, who recently played Austin with Devo, will perform a special YouTube Presents, streaming concert live from the Google offices in New York City on October 10, 2012, at 4pm EST, three days after the Port Chester, NY show at the Capitol Theatre.

Does your boss yell at you for looking at Cute Overload during work? Tell him a study shows that looking at cute pictures of cats actually boosts productivity.

Flying Lotus's new album "Until The Quiet Comes" not surprisingly received "Best New Music" from Pitchfork today. If you missed our late Friday post, Flying Lotus just announced a bunch of new appearances in addition to his upcoming Terminal 5 show with Thundercat, Teebs, and Jeremiah Jae.

You've probably seen the footage of Justin Beiber puking onstage in Atlanta by this point, but in case you haven't, it's at the bottom of this post. Neko Case gave him props via Twitter: "I'm sorry but puking on stage makes Bieber pretty hardcore. I've been at that point and not made it NEAR that long. Salut!" while fellow Canadian Damian Abraham (of Fucked Up) asked, "JUSTIN BIEBER PUKED ON STAGE YESTERDAY! DO U THINK HE IS PREGNANT?"

Lord Huron is releasing a new album called Lonesome Dreams on October 9, in the USA (a four song EP comes out on October 8 in the UK where the full length isn't released until 2013). Listen to the album now streaming on NPR, and download one of the new songs, 'The Stranger', for free if you want. Or just stream that song now:

Lord Huron is on tour now and gets to NYC one day after that LP comes out.

Chris Thile got the genius grant.

As mentioned, Yep Roc Records is celebrating its 15th year as a label with three nights of music in North Carolina. Among those playing the is Nick Lowe whose new video for "Stoplight Roses" stars Paul F. Tompkins. You can watch it here:.

Are you sick of "Gangnam Style" yet? If not please enjoy this international hit as choreographed by the dancing inmates of Cebu Provincial Detention and Rehabilitation Center in the Philippines. Watch it below: