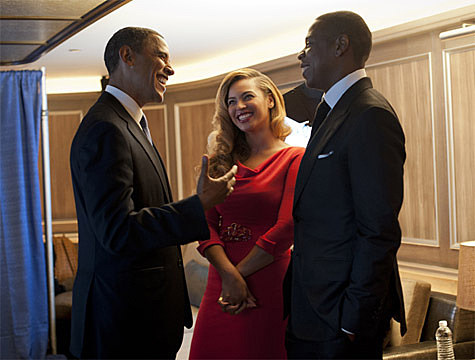 Jay-Z & Beyonce raised a cool $4M for Barack Obama at their benefit last night ("Beyonce could not be a better role model for my girls," Obama said,). Go on and brush your shoulders off, Jigga.

If you bought a ticket to that fundraiser, may we interest you in a live entertainment company?

Meanwhile, the President was on The Late Show with David Letterman last night, chatting about the Mitt Romney "47%" video and other things. Watch it below.

In other money news, Amanda Palmer is now going to pay those previously-volunteer musicians and her new LP debuted at #10 on Billboard.

If you were wondering the #1 album is, it's Dave Matthews Band's Away from the World which beat out Bob Dylan. The xx's Coexist came in at #5, not too bad!

Look at pictures from our Jon Spencer Blues Explosion record release party that was last night.

Hope to see you at our Rafiq Batia record release party that Anti-Pop Consortium is also playing.

Check out an excellent profile piece on the legendary Neil Young that appeared in the NY Times Magazine.

Deftones are back with "Leathers", the new song from their upcoming Koi No Yokan due on 11/13. Check out that song below in a video stream and/or down load your copy at their site.

---
Adam Scott (Parks & Recreation, Party Down) offered an in-depth deconstruction to the lyrics of Vanilla Ice's 1990 hit "Ice Ice Baby" last night on Conan. You can watch it below.

There's a new dwarf-filled trailer for The Hobbit which you can watch below.

The RZA made a kung-fu movie and will be touring in support of it.

Jack Black is going to talk to Peter Travers at 92YTribeca.

Nickelodeon's Yo Gabba Gabba!, have tour dates in their future, have started a kids clothing line and the commercial/music video is full of cool dads like Biz Markie, Wayne Coyne, and Dave Grohl. You can watch it below.

Wilco made a video for "Sunloathe" and you can watch it below.

ATP NY posted its schedule for this weekend's big fest. So did the DUMBO Arts Festival for that matter.

Matador enthusiasts take note: Mercury Prize nominees Alt-J have a new video for "Something Good" which may be be up your alley. Watch it below...